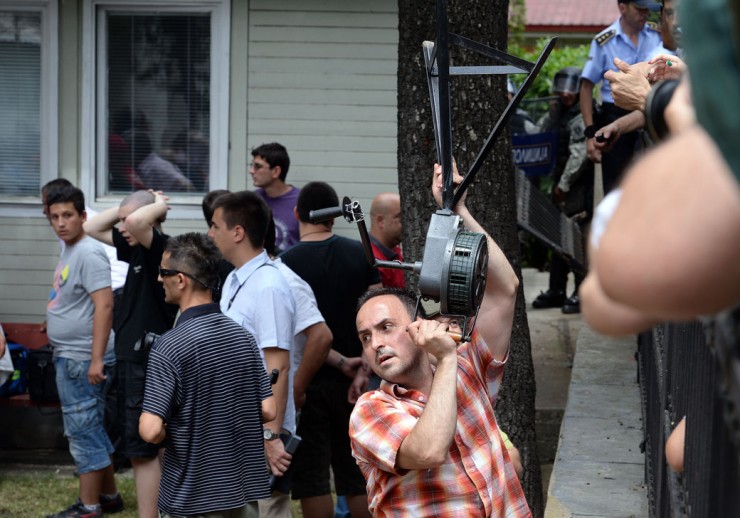 Judge Dusan Josifov made sure that the defense in one of the trials initiated by the Special Prosecutor’s Office has no chance to present its case. During a shocking hearing today, the judge refused all requests from the defense which could’ve allowed the defendants to have their side of the case presented.

Josifov tries the case known under the dramatic title “Violence in Centar”, initiated and named by now defunct and disgraced Special Prosecutor’s Office. Katica Janeva’s SPO tried to use a protest held in 2013 as an excuse to prosecute then Prime Minister Nikola Gruevski for violence. A crowd loudly protested during a meeting of the municipal Council as the leftist majority there wanted to put an end to the planned reconstruction of the St. Constantine and Helena church in the downtown of the city that was torn down by the Communist regime. A number of windows were smashed but no injuries were reported. Never the less, the SPO used an illegally recorded wiretap to allege that Gruevski wanted the crowd to attack then Centar Mayor Andrej Zernovski. Zernovski was not attacked, and neither was any council member, but the prosecutors never the less decided to prosecute the VMRO-DPMNE party leadership as organizers of a violent attack for what was a noisy but entirely legitimate protest.

The defense today asked that the they’re allowed to examine the original recordings of the conversation that is used as evidence, but the judge denied this request. He also rejected demands from the defense to have businessman Jordan Orce Kamcev, the former Mayor of Aerodrom Ivica Konevski and former Government official Kiril Bozinovski called as witnesses.

With Gruevski in political exile in Hungary, and with several lower level defendants forced into plea deals, the trial continues against former Transportation Minister Mile Janakieski, who turned into the “designated fall guy” in the SPO “quest for justice” and former member of Parliament Daniela Rangelova, who has since sided with the ruling SDSM party.

Janakieski said that it was Ivica Konevski who told him that their party should organize protests in Centar. Janakieski’s attorney insisted that Konevski is questioned before the court based on this claim, but judge Josifov refused. Konevski is now an outspoken supporter of the ruling SDSM party which makes him untouchable.

Another witness who was asked for by the defense is bishop Agatangel of Veles, who was publicly inviting citizens to protest in defense of the construction of the church. Agatangel was even present at the protest. At earlier hearings, Gruevski’s representatives asked that Agatangel is invited as a witness to testify whether Gruevski ever asked him to take part in the protests. The court refused to hear from the bishop.

At one point, the court agreed to have former head of Gruevski’s staff Martin Protoger invited as a witness, but after two delays, at a time when Protoger was present in the courthouse, the judge changed his mind and said that Protoger will not testify.
Most curiously, the highly dubious wiretaps that were published by the SDSM party, in an selective and edited form, could not be reviewed by the defense. The court refused to allow the defense to review the copied recordings, and accepted a forensics examination conducted in Serbia, although, under law, only experts from Macedonia can conduct forensics analysis of evidence.

During today’s hearing, an attorney representing Gruevski reminded the court that Gruevski and all other defendants received pardons from President Gjorge Ivanov in 2016. The pardons were later revoked under a much contested law, but under international legal practice, a pardon, once given, can’t be revoked. Never the less, the court insisted that the pardons are not valid and that the trial will continue as planned.