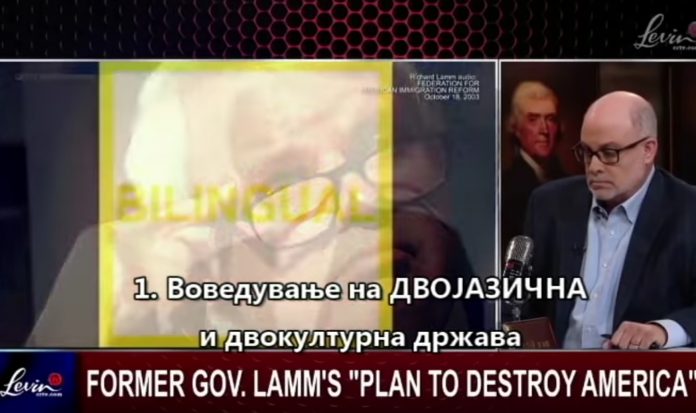 Macedonian news sites widely shared the remarks of former Colorado Governor Richard Lamm broadcast on the Mark Levin show, on how to destroy a nation. While Lamm is talking about the United States in his famous 2003 remarks, his comments about how bilingualism, multiculturalism, the grievance culture, population replacement divided loyalties and banning of free speech echoed strongly in Macedonia, which is facing pressures to change its identity and completely transform the country.

I have a secret plan to destroy America. if you believe, as many do, that america is too smug, too white bread, too self-satisfied, too rich, lets destroy America. It is not that hard to do. History shows that nations are more fragile than their citizens think. No nation in history has survived the ravages of time. Arnold Toynbee observed that all great civilizations rise and they all fall, and that “an autopsy of history would show that all great nations commit suicide.” Here is my plan: We must first make America a bilingual-bicultural country. History shows, in my opinion, that no nation can survive the tension, conflict, and antagonism of two competing languages and cultures. It is a blessing for an individual to be bilingual; it is a curse for a society to be bilingual. I would then invent “multiculturalism” and encourage immigrants to maintain their own culture. I would make it an article of belief that all cultures are equal: that there are no cultural differences that are important. I would declare it an article of faith that the black and Hispanic dropout rate is only due to prejudice and discrimination by the majority. Every other explanation is out-of-bounds, Lamm said in his speech, widely popularized by one of the most listened to conservative radio talk show hosts Mark – The Great One – Levin.

For comparisons sake, the leftist, ethnic minority supported Government of Macedonia recently pushed through a law to make the Albanian language co-official, and a series of amendments that rename Macedonia and open its history and culture to being rewritten or redefined.

I would encourage all immigrants to keep their own language and culture. I would replace the melting pot metaphor with a salad bowl metaphor. It is important to insure that we have various cultural sub-groups living in America reinforcing their differences rather than Americans, emphasizing their similarities. Having done all this, I would make our fastest growing demographic group the least educated – I would add a second underclass, unassimilated, undereducated, and antagonistic to our population. I would have this second underclass have a 50% drop out rate from school. I would then get the big foundations and big business to give these efforts lots of money. I would invest in ethnic identity, and I would establish the cult of victimology. I would get all minorities to think their lack of success was all the fault of the majority – I would start a grievance industry blaming all minority failure on the majority population, Lamm goes on to “propose”.

A common metaphor for Macedonia, as a country where ethnic communities live side by side but don’t mix is the “salad Macedoine”, a popular dish in France. And the latter point of Lamm, on how the big business is promoting this agenda in the United States, also resonates in Macedonia, where a large portion of the left wing policy promoting groups are funded by the George Soros led Open Society Foundation.

Both Lamm in his speech and Levin in his radio show naturally turn to the Balkans in as a warning about what America would eventually turn into.

Look at the ancient Greeks. Dorf’s world history tells us: …the Greeks believed that they belonged to the same race; they possessed a common language and literature; and they worshiped the same gods. All Greece took part in the Olympic games in honor of Zeus and all Greeks venerated the shrine of Apollo at Delphi. A common enemy Persia threatened their liberty. Yet all of these bonds together were not strong enough to overcome two factors . . . (local patriotism and geographical conditions that nurtured political divisions . . .) If we can put the emphasis on the “pluribus,” instead of the “unum,” we can Balkanize America as surely as Kosovo, the Democratic and Reform Party politician warns.