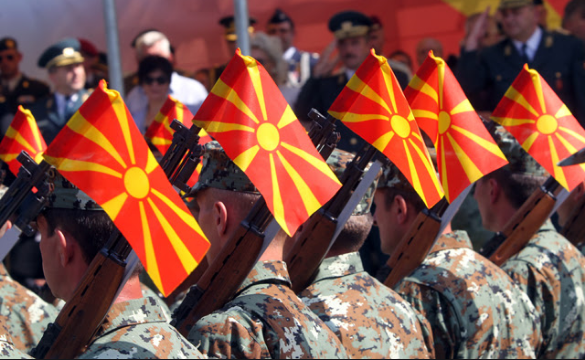 In an unsigned open letter, addressed to the Zaev regime by officers and soldiers of the Macedonian army, they demand that Macedonian national interests are protected during the negotiations with Bulgaria.

You are taking steps that seed doubt in many of us. You changed the name of the country, you removed the word Macedonia from our uniforms, are disarming us and “transform” our special operations and armored units, reducing us to light infantry and ground our air units. But most importantly of all, you sell off our history, give our heroes to our neighbors, and attempt to sell our language and identity. What’s next, our religion, our territory? Will it ever end? We believe that you fail to uphold your obligations to protect the interests of Macedonia and to work sincerely in the interest of the citizens and our homeland. We can’t accept that the Bulgarian fascist occupation was a mere administration and we can’t accept when our Minister Sekerinska tells us to forget about our history. The Army of the Republic of Macedonia honors August 18, a sacred day when during the Second World War the first Macedonian anti-fascist battalion “Mirce Acev” was formed. You can’t deny that and you can’t deny the traditions of the battle in which Macedonians fought against the Bulgarian fascist occupier, the officers and soldiers state in the letter that was shared with media outlets.