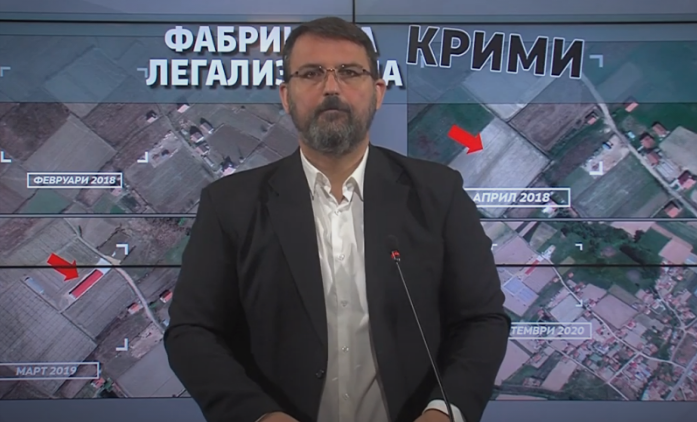 The “crime-legalization factory” has finally realized that it has been caught in crime, and is sinking deeper into the living mud of lies. They say a picture is worth 1000 words. Here are 4 photos behind me, for which the criminal association has no answer. In 2018, a new building was built – an illegal construction, and the municipality of Bosilovo quickly legalized it, based on fake statements and issued documents claiming that the building existed in 2010, thus committing an obvious crime. There is a something in common for all involved and signed, and that is membership and positions in SDSM, as well as closeness to Zoran Zaev. It is a criminal association for criminal legalization, VMRO-DPMNE spokesperson Naum Stoilkovski said at Sunday’s press conference.

The mayor of the municipality of Bosilovo, Zoran Zimbakov, yesterday gave direction for possible expansion of the criminal association. He says, I quote, “as mayor and the municipal administration went through several controls by the State Administrative Inspectorate, State Construction Inspector, Public Prosecutor’s Office, Ministry of Interior and a number of other institutions and says there were no remarks.” Well, ladies and gentlemen, it is impossible not to have remarks, if the truth was told. The photos speak for themselves. The truth is in the details, Stoilkovski said, adding that the criminal association and Zimbakov, must explain the presented photos.

The VMOR-DPMNE’s spokesperson says this is a scandal that must be investigated and the Public Prosecutor for Organized Crime must provide answers.