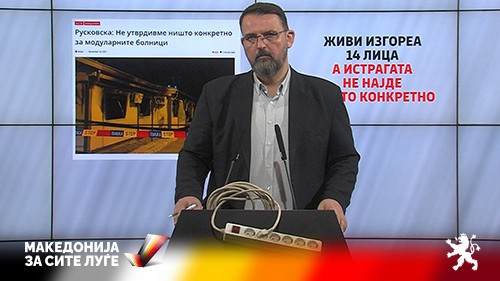 The lack of any progress in the investigation into the Tetovo hospital fire two months ago shows shocking lack of accountability, said VMRO-DPMNE spokesman Naum Stoilkovski. 14 patients and family members died in the fire in the improvised hospital built by a company owned by Zoran Zaev’s former Deputy Prime Minister Koco Angjusev. So far, the prosecutors came out with one report, indicating that the fire was caused by a defibrilator, but there are no charges or further details being shared with the public.

What was supposed to be a broader investigation, into the contracts to build 19 such hospitals by Angjusev, and the type of materials that were used in their construction, was reduced to a comment by Organized Crime Prosecutor Vilma Ruskoska, a Zaev loyalist, that she “found nothing in particular”.