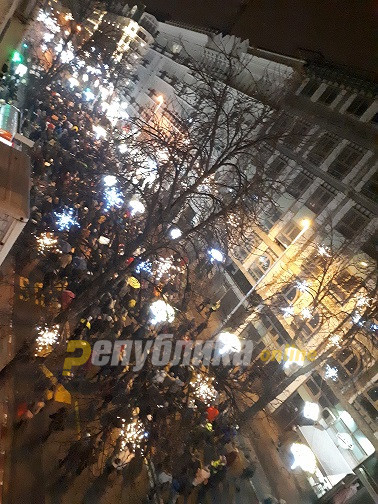 High school students are still in downtown Skopje, protesting against the horrific levels of air pollution. A lot of older people have joined them in what is now a loud protest in between the Parliament and the Government building with students carrying posters and chanting for urgent steps to resolve the problem.

The protest started earlier today, as part of the Fridays for future movement inspired by Greta Thunberg. In Macedonia it’s not just CO2 – its winter and the cities are covered in black smog, mostly coming from the coal and wood used for heating but also from the industrial facilities using cheap fuel. The protest was met by armed riot police deployed in front of the Government building, and by denunciations from commentators close to the ruling SDSM party, which called it a political plot organized ahead of the April elections, which only served to anger the students more, as they booed away school politically nominated principals and teachers attempting to stop the protest.

Mayor Georgievski defends his actions during the near riot in Cento