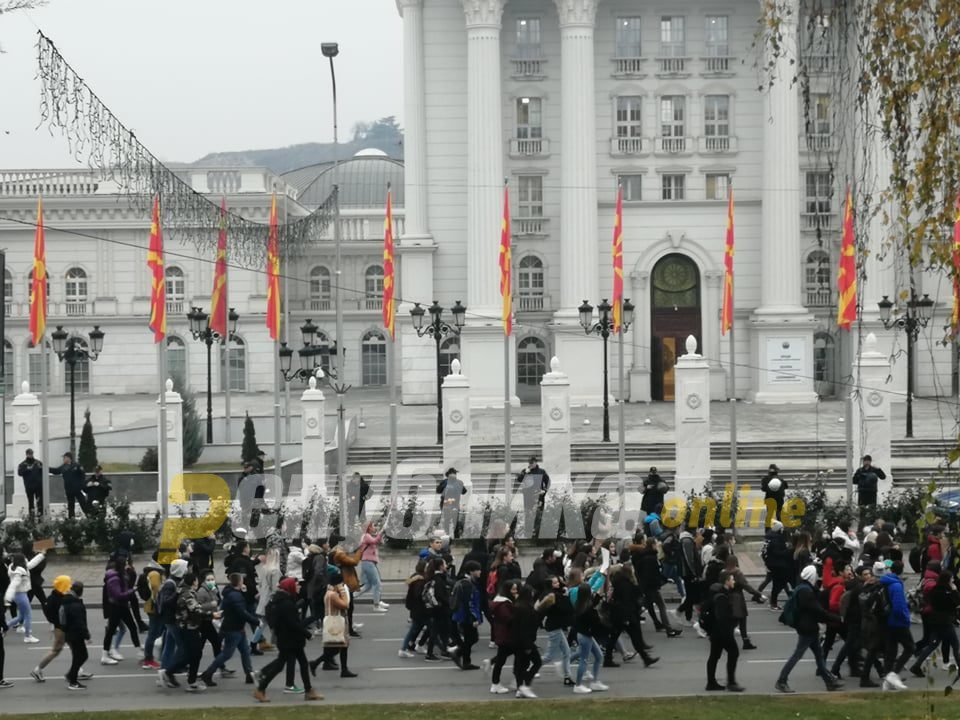 An armed police cordon was deployed today in front of the Government building, to confront thousands of high school students who are protesting in a “Fridays for the future” inspired march, as the Macedonian capital Skopje keeps setting world records in air pollution.

In a populist fit, the Zaev regime removed the fence in front of the building, but now, faced with a major protest, they had well armed riot policemen facing the underage children. 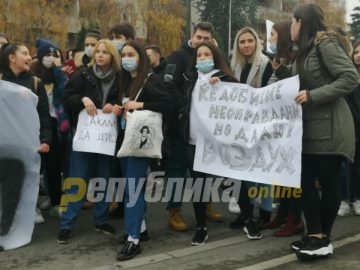 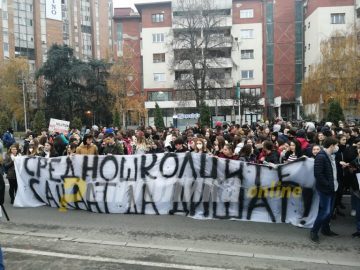 There’s more of us than there’s of you, the students were chanting at the sight of the police.
They carried banners declaring that “the students want to breathe” and were chanting their demands for immediate steps to curb runaway air pollution. Many carried masks, which are anyway used by thousands of Skopje citizens, as the air above the city resembles a Stranger Things episode every winter evening.

The protest took place in front of the Parliament, the Environment Ministry and the Government building. It was energized by the attempt of school principals to scare the students into remaining in their classrooms. Students video taped Gorica Ilijoska, the principal of the Nikola Karev high school and outspoken activist of the ruling SDSM party, as she was threatening them not to join the protests. Ilijoska is heard telling the students that all the other schools are holding classes – a lie that was easily busted but them, before resorting to the timeless “there will be consequences” if they boycott classes. The students loudly booed Ilijoska and left the schoolhouse anyway.

As the video spread like wildfire, inspiring other schools to march out, Skopje Mayor Petre Silegov sprung in action and in a face-saving attempt declared that he is removing Ilijoska from office. Silegov and other SDSM party officials, who also quickly condemned their comrade Ilijoska, were mindful of the image of striking young people will have on the public, and possibly of their own abuse of university student protests for political gain during their Colored Revolution campaign in 2015 and 2016. SDSM used to be able to rely on the youth activists, but the failure of the party to upheld its promises that they will clean up the air as soon as they grab power, and that they will reverse the catastrophic levels of youth emigration from Macedonia are now coming home to roost at the worst possible time for SDSM, with months before the early elections scheduled for April 2020.

Student protest for clean air lasts deep into the evening