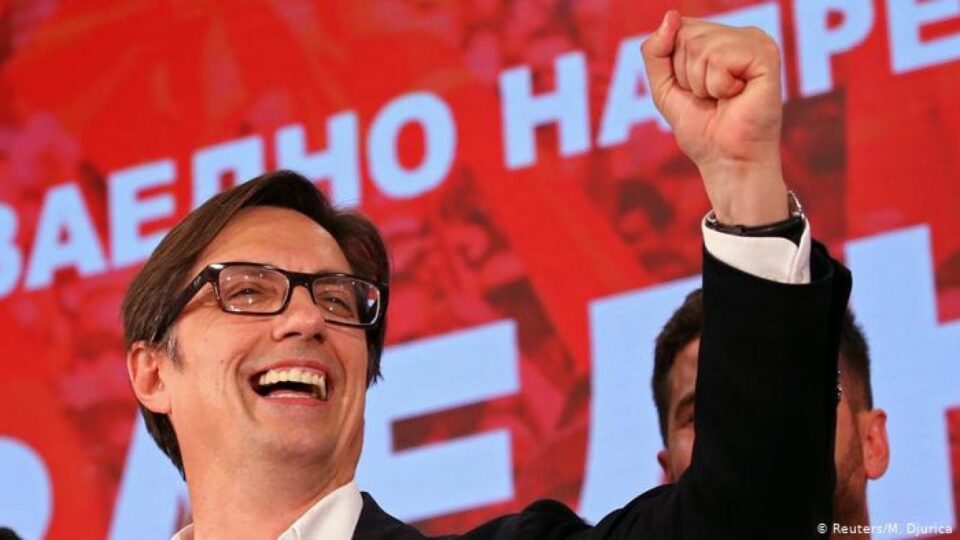 A total of 57.1 percent of the citizens declared they are against the “French proposal”, which was a prerequisite for Bulgaria’s veto to start negotiations with the EU, against 27.2 percent who accept it, which is a difference of approximately 30 percent in favor of the opponents of this document, shows the latest survey conducted by the “Konrad Adenauer” foundation as part of the “30 years of foreign policy and defense” publication.

According to the survey, Macedonian-Bulgarian relations are at a low level, which can have a negative impact on the quality of elementary communication between the institutions and societies of the two countries. 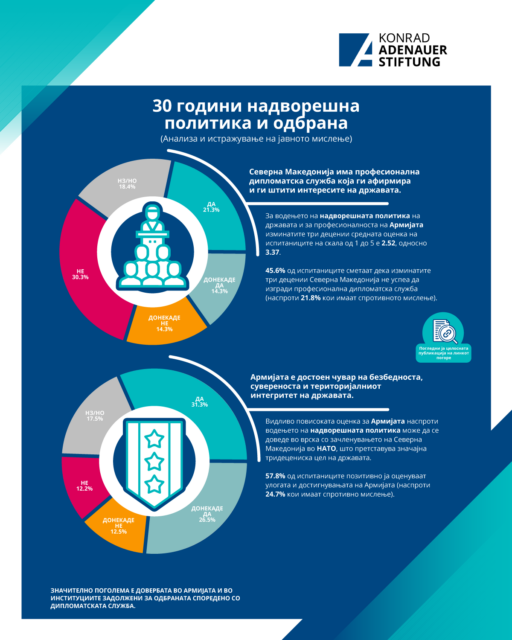 63.8 percent were in favor of Macedonia’s membership in the EU. This percentage, the Foundation states, although it is still very high, clear negative trends are visible compared to the first two decades of independence.

Cumulatively, 40.2 percent of the respondents find the reason for the country’s failure to join the EU in domestic weaknesses compared to 19.2 percent who find the reasons in external factors.

Respondents have the most positive impressions of the quality of mutual relations between Macedonia and Turkey, with 71.6 percent, with Serbia – 68.6 percent and with Germany – 64.3 percent.

The most negative impressions are about interstate relations with Russia and Bulgaria, for which 59.3 percent and 52.5 percent of respondents believe that they have bad bilateral relations with Macedonia.

A total of 45.6 percent of respondents believe that Macedonia has failed to build a professional diplomatic service over the past three decades (against 21.8 percent who have the opposite opinion). On the other hand, 57.8 percent of respondents positively evaluate the role and achievements of the Army (against 24.7 percent who have the opposite opinion). The conclusion is that the trust in the Army and in the institutions in charge of defense is visibly higher compared to the diplomatic service.

With regard to Greece, 36.5 percent of respondents state they support the Prespa Agreement. 30.6 percent of the respondents believe that after overcoming the dispute with the name Macedonian-Greek relations have a visible improvement, and 30 percent believe that resolving the dispute with the name has a positive impact on the decision of the Ecumenical Patriarchate to recognize the canonical status of the MOC-OA , on May 9, 2022. Macedonian-Greek relations are characterized by a positive dynamic, although there is still a pronounced restraint. 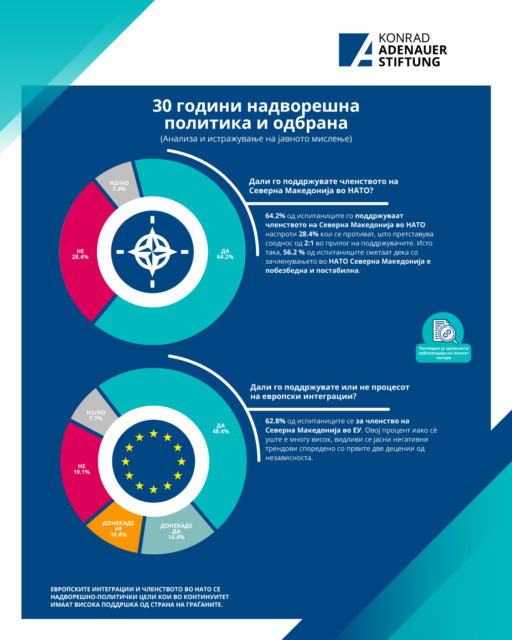 A total of 64.6 percent of respondents believe that Germany is a strong political supporter and ally, and 66.6 percent that it is also an important economic partner of Macedonia. Germany and the US are two more characteristic examples of a continuous, stable trust regarding the quality of the relations that these countries have with Macedonia.

Regarding the perceptions of which country is Macedonia’s greatest ally, 37.4 percent believe it is Serbia, 24.1 percent do not have an answer, and 19.8 percent believe it is the United States. Turkey (5.8 percent) and Germany, which 5.4 percent of respondents consider being Macedonia’s greatest friends, are further down the list of allied states.

Regarding which country is the biggest enemy of Macedonia, 44 percent of the respondents think it is Bulgaria, while 12.1 percent think it is Russia.

A total of 50.4 percent of respondents believe that Russian military aggression against Ukraine is unjustified and unacceptable, while 26.2 percent believe it is justified and acceptable, which represents a ratio of 2:1 compared to the first group.

Of the respondents, 65.7 percent support the “Open Balkans” project, while 15 percent do not support it, which means that the number of respondents who support this form of closer cooperation between Macedonia, Albania and Serbia is higher by 50.7 percent.

When asked when do you think Macedonia will join the EU, 28 percent of the respondents said that it will never happen, which is the largest group, while 23.7 percent expressed their pessimism by answering that they do not know when it will happen. that is, that they have no answer. Opposite these groups are the more optimistic respondents. Thus, 7.4 percent stated that the country’s membership in the EU will take place in 20 or more years, 10.4 percent in 10-20 years, 15.5 percent in 10 years, and 13 percent in five years. Deep pessimism about Macedonia’s membership in the EU, as well as about the speed of achieving this strategic goal, is visible in the respondents’ answers.

The overcoming of bilateral obstacles and the opening of a clear perspective for the dynamic integration of Macedonia without additional downtime, it is certain that it will also result in correcting the impressions of the citizens in a positive sense in relation to the Union itself, as well as in relation to the time of membership, reads the document.

The publication is composed of theoretical analysis and a survey of public opinion and aims to shed additional light on these two aspects of the recent history of the state. The survey of public opinion was conducted in August of this year. 1111 respondents were covered, keeping the general ratio in terms of basic demographic characteristics (gender, age over 18 years, ethnicity, profession, and education) while respecting the appropriate geographical balance.

Pendarovski changed three positions on changing the Constitution in one year!