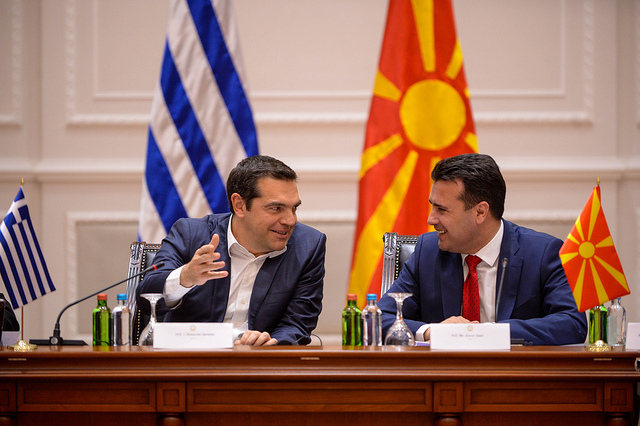 While Bulgaria has taken the lead in pressuring Macedonia to rewrite its history and alter its national identity, Greece is not entirely out of the picture yet. Greek Foreign Minister Dendies recently reminded his Macedonian counterpart Osmani that more needs to be done to rename streets, buildings and rewrite history books. And now the left wing opposition SYRIZA party, whose leader Alexis Tsipras signed the Prespa Treaty with Zaev in 2018, is also calling for stricter implementation of the treaty.

SYRIZA official Jorgos Katrugalos asked Dendias in the Parliament why isn’t Greece pushing Macedonia more to implement the Prespa Treaty. Katrugalos noted that there are “serious problems with the late implementation”, mainly in changing Macedonian history books to reflect Greek historic narratives, and in changing trademarks so that Greece has the right to use the term “Made in Macedonia”.

Katrugalos also mocked the right wing New Democracy party which resisted the Prespa Treaty but now tolerates it and allows it to remain unimplemented in full. SYRIZA wants to push a vote on memorandums of cooperation in several areas with Macedonia, which are part of the Prespa Treaty, in order to get New Democracy members of Parliament on the record of voting for elements of the treaty after they resisted them in 2018.

During the lengthy name dispute, Greek parties would often compete with each other trying to out-do the other party in pressuring Macedonia. That relationship is now also developing in Bulgaria.

China denies Greek company request over use of ‘Macedonian’