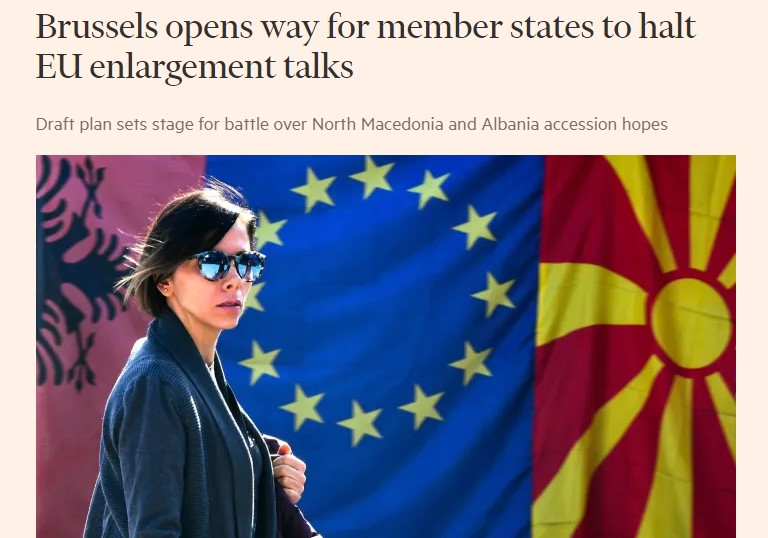 Brussels has set out plans to streamline the sprawling EU enlargement process and give member states stronger powers to halt or reverse accession talks, in response to concerns in Paris and other capitals, the Financial Times writes.

The draft plan, set out in a paper seen by the Financial Times, was triggered by a contentious French-led decision to stop Macedonia and Albania from opening negotiations to join the bloc.

The European Commission document, due to be published this week, sets the stage for a potential battle between EU member states over whether to give Skopje and Tirana the green light for accession talks.

Macedonia’s government faces a strong challenge in elections in April from Eurosceptic opponents, who say the country has been betrayed by the EU despite meeting demands from the bloc, including changing its name to end a longstanding dispute with Greece.

The draft commission enlargement plan acknowledges “strong calls” from member states, as well as western Balkan aspirants to EU membership, for greater clarity on what the bloc expects of applicants and what the consequences are of meeting or failing those tests.

It says backsliding or delays on necessary reforms by aspirant countries in accession talks could lead in the most serious cases to negotiations being put on hold or suspended, or to closed chapters of discussions being reopened or reset.

The paper also calls for improved incentives for well-performing aspirant countries, including increased funding and investment and closer integration with EU policy, markets and programmes in areas where progress has been made.

EU officials and diplomats stressed the document was still the subject of debate, including on how many member state votes would be needed to reverse enlargement talks once they had begun.

The rules would apply to accession talks launched after the plan was adopted, with an idea under discussion to allow an opt-in for the slow-burning negotiations under way with Serbia since 2014 and Montenegro since 2012, should the countries wish it.

The promise of greater clarity may appeal to the six western Balkan countries that have long wanted to join the EU, but they are also likely to be concerned the plan will increase the possibility that they could be barred from accession.

France provoked widespread anger in other EU states and the commission in October when it blocked the launch of accession talks with Macedonia and — with the Netherlands and Denmark — Albania. Paris argued the countries had not made sufficient progress with reforms to cut corruption and strengthen the rule of law.

Supporters of Skopje’s cause hope for a last-minute pivot from Emmanuel Macron, the French president, at a meeting of EU leaders next month, following local polls in France and shortly before the general election in Macedonia. But diplomats warn that electioneering in other countries sceptical about enlargement — such as the Netherlands, which goes to the polls next year — could further complicate the debate.

Nikola Dimitrov, Macedonia’s foreign minister, said a decision on whether to open negotiations ahead of April elections in his country, was “essentially a response to the question of what Europe wants to with the Balkans. If it wants a democratic and reconciled region, it should deliver when countries deliver on difficult reforms and resolve longstanding disputes.” He said any new enlargement strategy should focus on capitalising on pro-European political will, which should not be taken for granted.

Edi Rama, Albania’s prime minister, said Mr Macron’s push to reform the accession process was “a breath of fresh air in a process that seems to be stumbling and seemed to become more and more schizophrenic between technicalities and political decision-making”.

He said he hoped the new process would bring “more clarity, more fairness, although it may seem and it may be borne out of a long process of deeper and deeper unfairness”.

Making a distinction between the Balkan countries that had already initiated negotiations and those that followed was in principle “very unfair” and “geopolitically wrong”, said Mr Rama. But it would not change Albania’s pro-EU orientation or his generally favourable opinion about the new methodology.