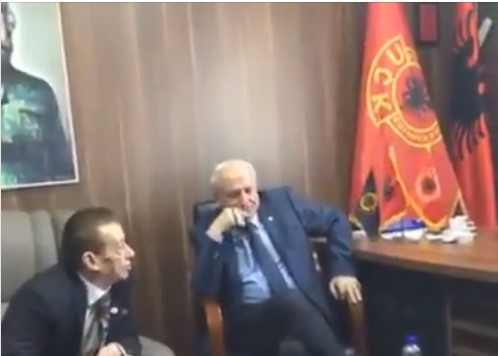 A recently revealed video shows how Albanian lobbyists in the US were planning to get into the office of President Donald Trump. The video reveals a meeting, which included ethnic Albanian doctor Skender Kodra, who works in New York, and the controversial, recently removed Reis of the Islamic Community in Macedonia Sulejman Rexhepi.

In it, an animated Kodra laments how the Clintons, who were obviously the first choice for the Albanian lobby, lost the race to Trump.

I did all in my power for Hillary. I had sat with Hillary and Bill like I sit now with you. But sadly, they lost. Trump, he likes the Slavs. There is one Albanian who Trump likes and respects. That photographer, Fadil Berisha. I asked why he likes him and I was told, listen doctor, Fadil has taken nude pictures of Trump’s wife. He has her nudes, Kodra tells the crowd and Rexhepi and the others nod along.

Berisha is a known photographer in New York, and he has photographed Melania Trump while she was still modeling. Kodra says that he met Berisha and discussed ways to get closer to Trump with him. In his comments Kodra, who also runs an association of Albanian scientists in the US, says that the main card Albanians can play with the Americans is that they are the most loyal in implementing US foreign policy in the Balkans.

The Albanian lobby is currently divided in whether they support or oppose a plan put forward by the few Trump loyalists in the State Department, to elevate the level of talks between Serbia and Kosovo. It is widely assumed that the talks will include an attempt to redraw borders between the two countries to make them more ethnically homogeneous.

Man from Skopje arrested for trying to extort 1,500 EUR from a woman using her nude pictures