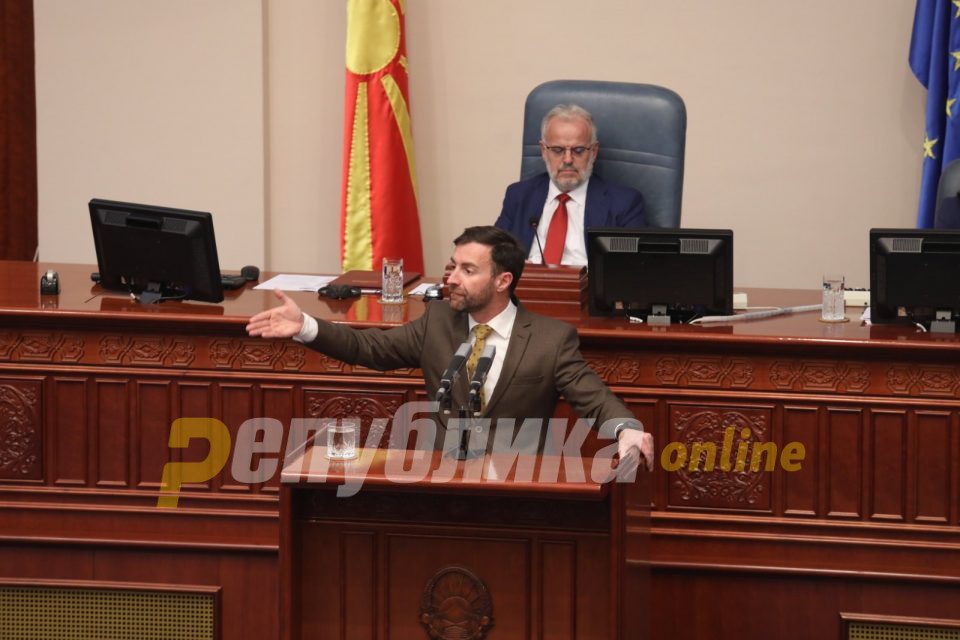 The Macedonian Parliament resumed its debate on the controversial PPO law on state prosecutors, with a heated exchange between the opposition VMRO-DPMNE party and the “Gang of eight”.
Very few SDSM representatives tried to defend the law they are proposing. In their place, members of Parliament Emilija Aleksandrova, Krsto Mukoski and Nola Ismajlovska – Starova are the main supporters of the law. They are part of the group of former VMRO-DPMNE representatives who were expelled from the party after voting in favor of the name change, following credible reports that they are being blackmailed by the Zaev regime or bribed with public procurement contracts (or both).

On the other side, VMRO-DPMNE representatives Antonio Milososki, Ilija Dimovski, Vladimir Gjorcev and Nikola Micevski attacked the PPO law, insisting that it will entrench SDSM loyalists as prosecutors in an attempt to shield Zoran Zaev from investigations after the April 12 elections. SDSM and the “Gang of eight” are presenting the law as an important element in Macedonia’s bid to open EU accession talks this spring.

Stop lying to the people, there will be no accession talks date in March. Remember, you were told that it is not just important to adopt the law, but also the way in which the law will be adopted will be looked into. You are meeting with the Ambassadors and you know that they know everything. They know all there is to know about the Racket scandal, they know where the Louis Vuitton bag filled with cash ended up, in which city. They know, Ilija Dimovski said after the “Gang of eight” insisted that the international representatives in Macedonia have welcomed the proposed law.

One comment which prompted widespread ridicule in the public was the claim by Krsto Mukoski that he “did his time”. Mukoski was charged with “terrorism” by SDSM affiliated prosecutor Vilma Ruskoska, but was released from detention in early 2019, after he and several other members of the “Gang of eight” made a deal with SDSM to vote in favor of the imposed name change in exchange for amnesty. Since then, Mukoski and other members of the group had public contracts diverted to their family firms, and had family members hired in the public administration. The sight of SDSM members of Parliament applauding Mukoski after his remarks also caused a profound shock in the social media.

Zaev lied about the Good Friday massacre to get votes and keep tensions high, journalist says