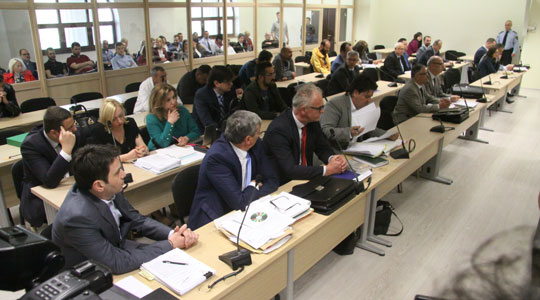 The coronavirus spread is beginning to take its toll on some of the high profile, politically motivated court cases going on in Skopje.

Several elderly witnesses who were supposed to testify in a trial initiated by the now disgraced Special Prosecutor Katica Janeva against the VMRO-DPMNE party refused to show up for a hearing today, citing their fear of the coronavirus. Prosecutor Lile Stefanova, who is still leading the case meant to intimidate VMRO-DPMNE party members, demanded that the judge orders them escorted to the court for the next hearing, despite the fact that the sister of one of them is in quarantine, and one of the defense attorneys has recently been on a trip to France and is also likely to enter into self-isolation.

The trial, pompously named Titanic by Janeva and Stefanova, has dozens of witnesses and suspects, and alleges that members of the VMRO-DPMNE party who changed addresses did so in order to be able to vote and help swing municipal elections.