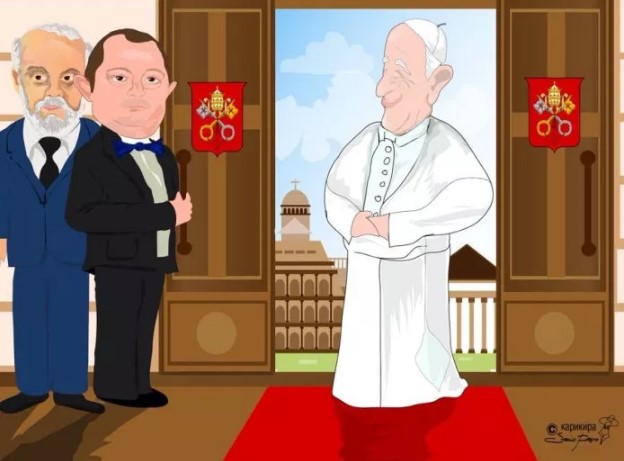 The Macedonian Parliament delegation which took to Rome to celebrate the feast of Ss. Cyril and Methodius contained a number of unsavory characters. It was led by former Albanian terrorist commander Talat Xhaferi, for one. But, none caused as much ridicule in the public as Krsto Mukoski, the ex VMRO-DPMNE member of Parliament from Vevcani, who was expelled from the party after voting to rename Macedonia into “North Macedonia”.

Mukoski was one of the three VMRO members of Parliament charged with “terrorism” – in his case for opening the doors to the Parliament as protesters stormed the building on April 27th 2017, to prevent the fraudulent election of Xhaferi as Speaker. Along with the others, he was moved between detention and house arrest until they negotiated a deal with Zaev under which they will receive pardons in exchange for voting to rename the country.

Mukoski negotiated something more, apparently. His family construction company is a frequent recipient of public contracts awarded by the Zaev regime. International supporters of the Prespa treaty are doing their best to promote the group of nine ex VMRO representatives as a political option, but this usually only prompts more mockery of their group in Parliament. 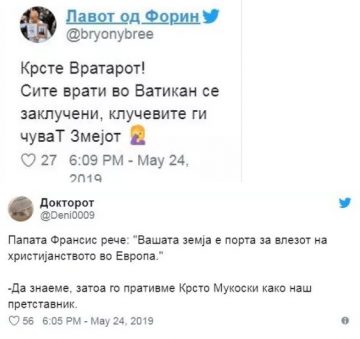 Mukoski’s introduction into the delegation sent to meet Pope Francis riled commentators on the left and on the right, with responses ranging from “Krsto the Doorman is here, open the doors to the Vatican” and “The Pope said that Macedonia was the door to Christianity in Europe. That is why we sent Krsto Mukoski to represent us”.

It pays to be on the Government’s side: Company owned by the Mukoski family wins another public contract