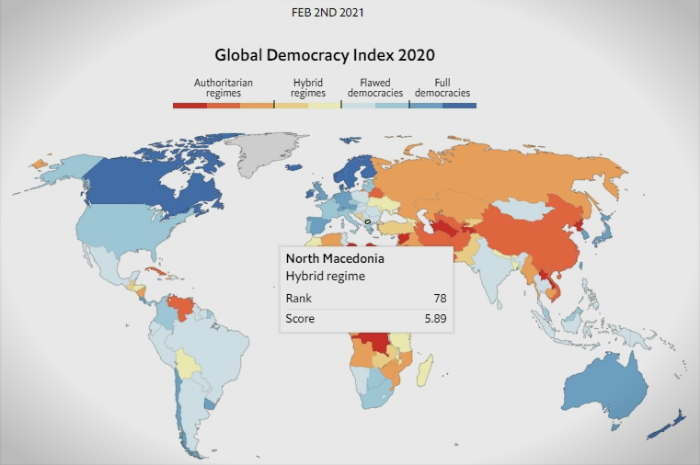 Macedonia has been ranked 78th in the group of hybrid regime in the latest report of “The Economist” on the World Democracy Index 2020.

The country is in a group with Bolivia, Senegal, Montenegro, Tanzania, Moldova, Uganda, Bhutan, Lebanon, Nigeria.

According to the data from “The Economist” from 2016 to 2020, Macedonia’s score has worsened compared to previous years when its score was over 6.

This is the second defeating ranking that the country receives in a short time. Just a few days ago, Transparency International ranked Macedonia 111th in the Corruption Perceptions Index.

In this ranking, the country is in the company of Mongolia, Panama and BiH. This is the by far the worst corruption ranking for Macedonia.

Mickoski: Macedonia is a hybrid regime, with Zaev it will remain at the bottom

Taravari on Laskarci bus crash: In hybrid regimes like Macedonia such cases are never resolved