Tamara Todevska’s performance at the Eurovision song contest, where she ranked eight, revealed a deep divide in Macedonia. Tamara’s supporters, who come mainly from the left and are focused around the SDSM party, launched tirades at their political opponents accusing them of not being enthusiastic enough about her performance and failing to support her.

Tamara sang a women pride anthem called Proud, and she and her equally famous sister Tijana gladly embraced the name “North Macedonia”, using it in the promotional material and in public appearances. This soured many on the right to this year’s operation Eurovision. Zoran Zaev’s regime strongly endorsed Tamara, who used to perform for their political opponents VMRO-DPMNE until a few short years ago, and angrily dismissed the idea of renaming Macedonia as recently as 2018. Some of Zaev’s and Pendarovski’s own PR managers were dispatched to work on Tamara’s promotion, public resources flowed freely toward her bid and some of Zaev’s supporters in the diplomatic corps also joined in. 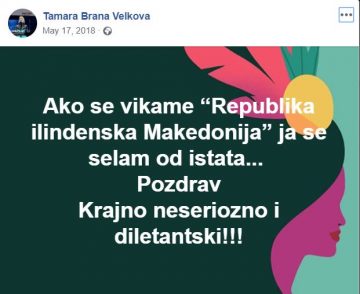 In response, some in the Macedonian diaspora, who had the option to vote in favor of the song, publicly stated they will neither watch the contest nor support the “North Macedonian” candidate. The actual voting power of the Macedonian diaspora, which is largely disgusted and repulsed by the imposed name change, is questionable – no Macedonian candidate has won the contest or even ranked among the top five. Still, her diehard supporters found in the diaspora an easy target to blame for her failing to win the contest. 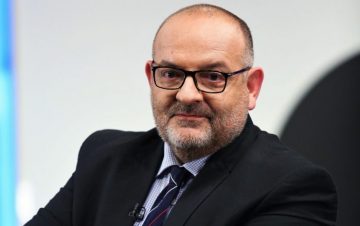 These people live sad lives. They are always on the losing side when Macedonia was winning. They think they are protecting the Macedonian identity with their actions, but they only celebrate our defeats. This nationalist frustration is most pronounced among Macedonians who moved out of the fatherland. Many of them believe that the fatherland is to blame for their unhappy emigrant lives, wrote Saso Ordanovski, one of the strongest Zaev public supporters, accusing the Macedonian diaspora of not lining up behind Tamara with their support and votes.

Some went even further. Gjorgji Galetanovski Chombe, SDSM appointed director of the Skopje ZOO and until recently one of the top men in Stevo Pendarovski’s presidential campaign, wrote an angry rant cursing the diaspora.

What else could we expect from people who sold out and fled their native country? So embarrassing. They never minded Fyrom, but now won’t vote for Tamara because of the word “Northern”. Let’s strip them of their passports. Despicable people. Toil there under that foreign sun and spit on everything that is good. Never come back, Galetanovski wrote on Facebook, but deleted the post amid outrage, after several diaspora groups called for his dismissal. One of his assistants from the ZOO was embedded with Tamara’s team in Tel Aviv.

On the other side of the political divide, professor Zidas Daskalovski, who was prominent in the campaign of VMRO-DPMNE presidential candidate Gordana Siljanovska, tweeted that “the people don’t like you, here or in Europe”. It was a reference to how Tamara raked in votes from the juries prepared by the organizers – often national TV stations – and ranked third after these votes were in, but then failed miserably when it came to winning the votes of the public, of the actual voters, with slightly over 50 votes, which dropped her five places on the final ranking.

A frequent excuse among Zaev’s supporters and the defenders of his name change is that Macedonia was previously known as FYROM – an abbreviation of the interim reference “former Yugoslav Republic of Macedonia”. The name always caused confusion during the Eurovision, or Olympics, world cup qualifying games, wherever Macedonia wanted to compete under its constitutional name Republic of Macedonia, but Greek officials would demand the use of FYROM, or FYR Macedonia, or the full reference. These events would always be followed by a tug of war, with Greek demands and pushback from the Macedonian side.

And while this confrontation would always endear the competitor who would reject the Greek requests in front of the Macedonian public, this is the first time the Macedonian delegation competed under “North Macedonia”, seemed eager to use it, and never tried to use the name a vast majority of Macedonians consider their own. Ironically, as a number of social media users observed, it happened over a song encouraging women and girls to feel proud and never apologize for what they are, but it undermined the sense of national pride, which Macedonia gave up on when it accepted the imposed name change. 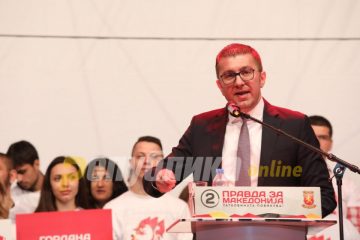 VMRO-DPMNE leader Hristijan Mickoski offered his congratulations to Tamara for her performance. He also included a clear message in his tweet – “Macedonia Forever”. 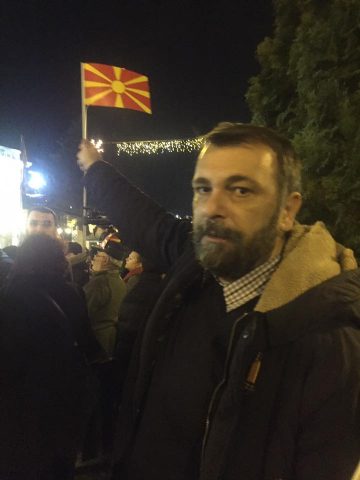 Now you blame the diaspora? You want to ban them from voting? Who put you in charge? Who do you think you are? We need to embrace our diaspora, not estrange them, wrote VMRO stalwart Oliver Shambevski, pointing out to the decades long support which the Macedonian diaspora lent to its native country.

Leftist professor and activist Mirjana Najcevska, on the other hand, asked that the “voters from the diaspora are removed from the electoral rolls, because they live in the past”. It was a common response among commentators on the left – the same who wanted the diaspora to vote for Tamara, regardless of its actual voting power, have in the past requested that the diaspora is barred from voting in Macedonian general and presidential elections, given how it reliably supports VMRO. Still, Zaev was publicly calling on all Macedonians who live abroad, whose voting rights he sought to curb in the past, to vote for Tamara this time.

One of Zaev’s recent political prisoners Bogdan Ilievski offered a tongue in cheek comment about the lunacy of the situation where people are asked to vote not based on whether they liked the song but on their national origin, pointing out that Norway won the most votes from other countries. 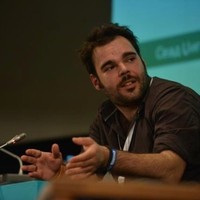 It seems that Norway (5.000 EUR average salary, 75.000 USD GDP per capita) has the LARGEST emigrant community in Europe, which gave it  its300 votes. Oh what a tragic life, Ilievski mocked the left’s arguments.

Tamara’s ranking was Macedonia’s best ever, but not by a lot. Attempts to drum up much enthusiasm for her fell flat outside of the political circles who took it as their job to promote her. Many called on her publicly to follow the example of previous Macedonian Eurovision contenders and make sure she uses the name Macedonia, without adding the adjective North, in at least some of her TV interviews. Tamara failed to do so. This confirmed fears that a trashy but massively watched song contest where Macedonia itself uses the name “North Macedonia” will solidify its prominence and will entrench its use internationally. This fear by opponents of the imposed name seemed justified as google searches for “North Macedonia” skyrocketed after the contest.

The attempts to drum up euphoria around Tamara continued after the contest. A Government delegation was sent to the Skopje airport (recently renamed by Zaev who removed the name Alexander the Great to placate the Greeks) to welcome the singer back to the country. A pro-Government TV station sent a crew to ask random airport commuters, some of whom were likely on their way to join the ranks of the much reviled diaspora, whether they are there to welcome Tamara, drawing bemused responses.

The idea for a welcome parade in Skopje was scrapped – it would have to take Tamara through the Macedonia Gate, built by the Nikola Gruevski led VMRO Government – an object frequently attacked both figuratively and directly by SDSM supporters in the past. SDSM itself mocked or denounced such displays of pride in Macedonia in the past – the party famously tried to boycott a mass parade for the Macedonian basketball team which ranked fourth in the 2011 European Championship because the fans would often sing a song evoking Macedonian lands in what is now northern Greece. The other such large event, the 2017 handball Champions League victory by Vardar was not only ignored by SDSM, the party did all it could to expel the Russian businessman who supporter Vardar to the title out of the country.

It’s a curious state of affairs where the party which refused to participate in the rare past successes for Macedonia now rails against the opposition for not showing enough enthusiasm for the promotion of “North Macedonia”. At this point, it is doubtful if there is anything that can bring the two sides truly together.

Zaev defends the idea of counting the diaspora in the census: They might decide to come back tomorrow

Number of emigrants registered in the census rises to 121,000