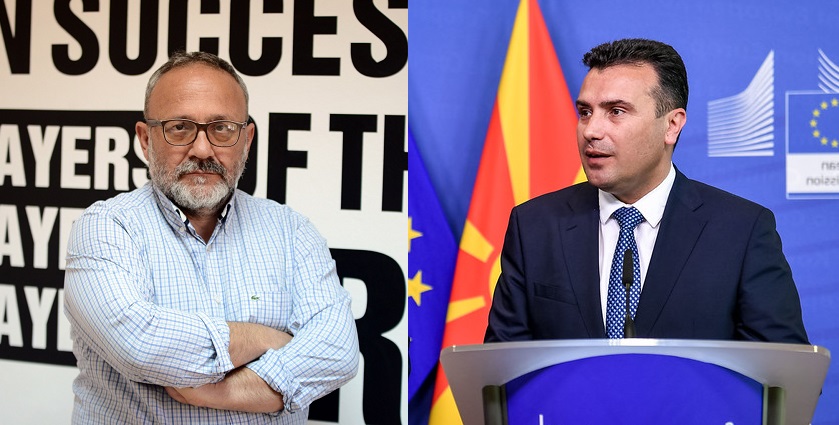 Journalist Branko Geroski, who published much of the reporting that led to the arrest of Special Prosecutor Katica Janeva on racketeering charges, wrote a list of his main criticism of Zoran Zaev and his SDSM party. Geroski strongly supporter Zaev and SDSM during the Colored Revolution, but later turned on them, accusing them of corruption and violating democratic norms.

In response for publishing details on the Racket scandal, a conversation was leaked, apparently by Zaev supporters, meant to present Geroski as working for businessman Jordan Orce Kamcev, which prompted his response today. The journalist accueses Zaev of surrounding himself with uncritical supporters, who are only allowed to talk about Zaev’s wins.

Racket scandal: New leaks indicate that the Louis Vuitton money bag was bugged after all

If you insist that we report only on your successes, Geroski writes to Zaev, I will indulge you. They are many. For one, you won power without winning elections. You had two seats in Parliament less than the winner. You managed to form a minority Government with major support from the fighters against the Nikola Gruevski regime, the international community and a turn-around decision from Ali Ahmeti. Good for you! I’m not saying that was bad, I’m just facing you with that fact. It should have given you the urge to reduce the conflicts in our society and unite the nation. You began acting as the triumphant winner. A winner who won at the table, Geroski writes.

Other issues which Geroski used to support but now says Zaev mishandled include the concessions toward Greece, Bulgaria and the Albanian minority.

You managed to resolve the issue with Greece. Great! But you promised no constitutional change and a new name which would only be used domestically. “So long as I breathe”, you said, “the Constitutional will not changed”. You’re still breathing, and I hope you continue to breathe for e a long time to come, but you lied to us dear Zaev. You were warned not to stage a referendum and yet you tried to persuade the public in the name change. The referendum failed, and you tried to tell the public that it was successful, that two plus two equals five. You resolved the issue with Bulgaria, and then you tangled it up again. You provoked Sofia into opening the painful issues of the existence of the Macedonian nation and language. Now some of the issues which seemed objectively easy to resolve have turned into equations with three variables. Your success is resolving the issue of the Albanian language, the bilingualism treaty, which was both criticized and much supported. You had my support in this. But, to be honest, it is clear that in some areas, such as the judiciary, bilingualism will delay procedures and will violate other, just as important human rights. The Venice Commission warned of this in its report, and you try to reject it with cheap spin. This will not earn you the lasting support of DUI and Ali Ahmeti or the other Albanian parties. Don’t count on losing the next elections but forming the next government with the help of Pendarovski and the Albanian parties, just because the diplomats will say so. These fairy tales are long gone now, Geroski writes.

The journalist blames Zaev of launching an all out assault on the Macedonian national identity, insisting that Government officials who are not required to use the name “North Macedonia”, do so like parrots on Zaev’s orders. Even the Macedonian history is now being named the “history of the Republic of North Macedonia”, Geroski writs, calling this an “unnecessary and uncalled for self-denial of our nation”.

And finally, on the issue of corruption, where Geroski broke with Zaev, he says that the Racket scandal destroyed the hope of having justice and the rule of law in Macedonia. Geroski announced that he will make additional revelations about Zaev’s camp in the coming month.

Your biggest success was in that you disappointed the nation and destroyed its hope that it will ever have justice and peace. Remember our chief rallying cry which brought you to power. Instead of fundamental reforms in the judiciary, you and your advisers saw the reforms as introducing Jacobin justice. You managed to create a revolutionary court, a court martial, unheard of in modern Europe, with the Three Graces led by Katica Janeva. Most of their investigations were amateurish, they violated procedures, they violated even the law that created their unit and threw away the support of the closely briefed press and the public that was eager for justice. Maybe this pyre would’ve been tolerated by the international community if it weren’t for the Racket affair and Janeva’s ties to a group of racketeers. Trying to cover up this scandal, you, dear Zaev, are embarrassing yourself. It would’ve taken courage to sustain the damage of the scandal, but you were not prepared to take sacrifices. Your propaganda machine is currently pressuring everybody who dares mention the Racket scandal and that is the latest disappointment inflicted by the people who were supposed to be the new face of Macedonian justice, Geroski writes in his widely shared article.