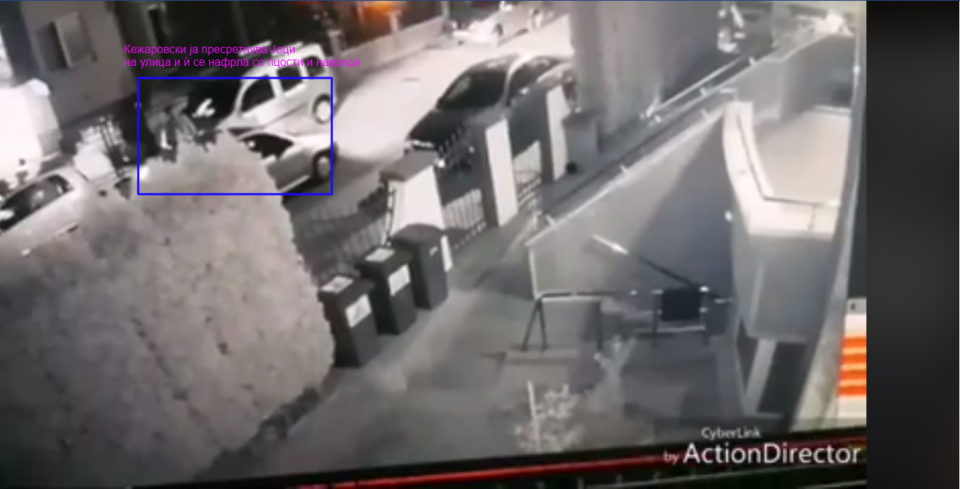 Journalist Jordanka Ivanovska revealed that she was assaulted by another journalist Tomislav Kezarovski – who is best known for becoming a media freedom cause after undergoing a trial for revealing the identity of a protected witness in a murder case.

Ivanovska published the video of the incident that happened on Saturday evening, when she visited a friend in Skopje, when she found out that Kezarovski is waiting for her.

I drove past him with my car, looking for a place to park. He walked toward me, waited in front of my friend’s house. I’ve no explanation how he kenw I would be there. He lunged at me with insults, using street language, looking like a psychopat. He failed to scare me, I sent him packing, stepped out of my car and shouted at him, while people were coming out of their homes to see what’s happening. He was acting like a maniac, Ivanovska said in a Facebook post.

She called on the ruling SDSM party, which supported Kezarovski in the past, to distance itself from him, given that it is likely that he is being aggressive and abusive thinking that he has the backing of the Government. Ivanovska pointed to a Facebook comment from Kezarovski’s wife, who was praising her husband over the incident. The entire confrontation apparently began days before the incident, when Ivanovska criticized Kezarovski for his lack of solidarity, when he didn’t appear at a media protest to denounce the criminal charges filed against investigative journalist Aleksandar Mitovski.

Kezarovski was a crime reporter for a tabloid magazine in 2008 when he published the name of a protected witness who has testified against two men charged with a contract killing of an elderly man in the village of Orese – which is also Kezarovski’s home village. As the witness withdrew his testimony after his name appeared in the press, Kezarovski was charged with intimidating the witness. He refused to reveal the identity of the judiciary officials who revealed the name to him, and insisted that the case against him is driven by higher political circles. Kezarovski insisted that he is being targeted for revealing evidence pointing to a Government cover up in the death of journalist Nikola Mladenov in 2013, a claim that has since been denied by Mladenov’s wife but featured prominently in the SDSM led propaganda campaign that sparked the political crisis in 2015.

Kezarovski spent six months in detention and over a year in house arrest while journalist associations protested for his release, making him into a cause for alleged violations of freedom of expression in Macedonia. The prosecutors claimed that he was involved in an attempt to save the contract killers from serving their sentences and that revealing the identity of a protected witness will endanger all future such witnesses.