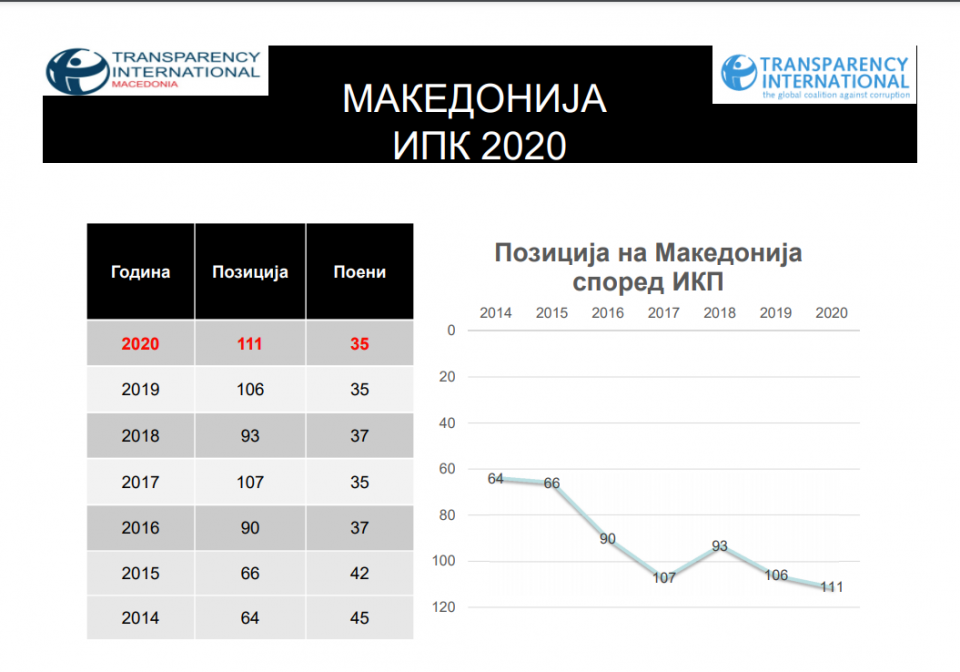 After the Zaev Government issued a statement denouncing the dismal Transparency International report as “mere perception” that corruption is running amok in Macedonia, the local head of the corruption watchdog gave her response. Slagjana Taseva, director of Transparency International – Macedonia, said that the report is a serious examination of specific cases of corruption in any examined country and that the Government has not tried to work with the organization and to address the main problems in fighting corruption.

TI ranked Macedonia 111th in the world in fighting corruption, which is the worst ranking in our history.

This is not a mere poll of a perception among the citizens. This report analyzes statistical date, specific cases and polls people who have direct contact with Government institutions. It reflects on opinions of businessmen about how easy it is to do business in Macedonia, on how endangered human rights are, access to justice in Macedonia, whether contracts are upheld well… That is not the case with our judiciary. The worst result we get is in the rule of law component, and it is down by two index points. It negates the minimal improvements in some other areas, Taseva said.

After a full day of brutal press coverage, the Government issued a statement in which it declares it will address the issue seriously, but then goes on to dismiss the TI report as just “perception of citizens” and blames the press for reporting more on cases of corruption and high level crimes. Taseva said that the corruption problem has become exceptionally bad with the Zaev Government.

We have consistently bad results for the past four years of bad results. We are stuck at 35 index points except in 2018, when we had 37. That is not good. nobody from the Government has reached out and asked us how do we prepare the index and what should be done to improve the situation. They are happier just to denounce the results, Taseva said.