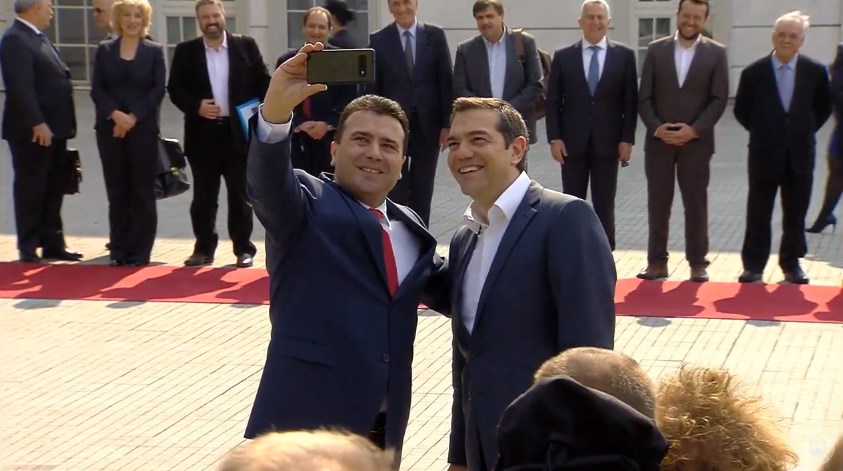 Greek Prime Minister Alexis Tsipras arrived at the government building where he was welcomed by Prime Minister Zoran Zaev and government ministers with state and military honors. Zaev seized the moment to take a selfie with his Greek counterpart.

Tsipras and the delegation accompanying him arrived at the Skopje airport with a government plane at around 09:40 h. They were welcomed by Deputy Prime Minister and Defense Minister Radmila Sekerinska, after which they headed to the government’s building.

Prime Ministers Zoran Zaev and Alexis Tsipras will hold a bilateral meeting, and afterwards they will hold a joint press conference. An intergovernmental meeting will also be held.

In the afternoon, Zaev and Tsipras are to attend and address a business forum.

Tsipras is accompanied in Skopje by a delegation comprised of over 70 businessmen, which is supported by the Enterprise Greece, the Hellenic Company of Investments and Export Trade SA, is responsible for attracting foreign investments and promoting Greek exports.

In light of Tuesday’s visit to Skopje, Greek Prime Minister Alexis Tsipras refers to the future plans for bilateral cooperation and the importance of the Prespa Agreement in an interview with MIA, the first for a media outlet from Macedonia.

PM Tsipras says the visit is of historic significance, based on the new strategic vision for both countries. The delegation will include ten ministers, with series of agreements to be signed in different fields.

Tsipras says Greece and Macedonia must be partners and allies, and sends a message that Athens needs a stable and secure northern neighbor, while Skopje needs a strong neighbor that supports its European perspectives.

Tsipras’s visit, which is assessed as historical by the media and analysts, will be broadcast live from the national televisions of Greece and Macedonia, including the arrival at the airport, the formal reception outside the Government’s building, the intergovernmental session, the joint press conference of the prime ministers and a business forum.