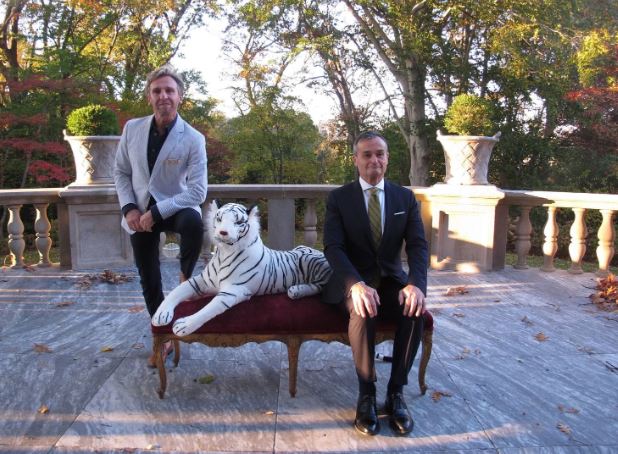 Most diplomats coming from countries who objected to the opening of EU accession talks in June have to be, well, diplomatic in their statements about it. Not so with Gerard Araud, one of the most distinguished French diplomats. Araud recently retired after five years as French Ambassador to Washington D.C., which gives him free rein to discuss various issues, and over the past few days he strongly criticized the calls that France agrees to the opening of EU accession talks with Macedonia. His tweets help clarify some of the thinking behind the French opposition to EU enlargement.

Certainly good for North Macedonia but is this endless enlargement good for the EU? Making the EU ungovernable “blob”. By experience, with so many countries around the table, no significant decision is anymore possible, Araud opined, criticizing an article in the British Economist which passionately called that Zoran Zaev is rewarded for the name change with an opening of EU accession talks as soon as possible. 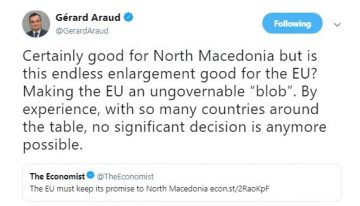 Araud was called out by other diplomats on Twitter, including a Kosovan Ambassador, which only inspired him to emphasize his point and dismiss sentimentality.

Don’t you see that the EU is already not working properly at 28? Can’t you have a pragmatic analysis of the Brussels reality before taking the high moral ground? The EU is facing a major crisis. Is it the moment of talking of enlargement?, Araud tweeted.

The diplomat, who also represented France in Israel and the United Nations over the past almost 40 years, set out a number of questions that need to be answered in order to reach a conclusion on the Macedonian request, each more negative than the next.

Be realistic instead of being sanctimonious. (1) Are these countries fulfilling – reality fulfilling – the criteria (governance, corruption, etc). (2) Are the EU institutions ready for a new enlargement. (3) Are our people in favor of enlargement. (4) Is enlargement the priority?, Araud wrote, dismissing the previous enlargements as fraud. “We have already been fooled once. Not twice”, he wrote to British commentator and strong supporter of Zaev and of the opening of EU accession talks with Macedonia James Ker – Lindsay. 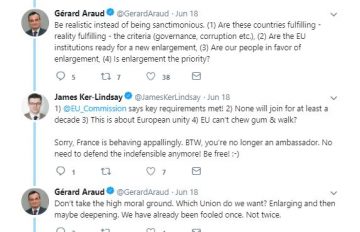 This theme, of Britain, which should be leaving the EU, supporting enlargement, is a matter which Araud frequently returns to, and it offers a rare insight into the thinking in Paris. French President Emmanuel Macron wants to see a deeper union, one possibly containing a joint finance ministry or other shared institutions between the existing members, while, historically, the United Kingdom has asked for a union that is wider in territory, adding more and more members, but looser, watered down in its content. The Macedonian and Albanian requests to open EU accession talks seem to be seen by diplomats from Paris as part of this British strategy.

Britain has always been in favor of enlargement, any enlargement. Diluting the EU has been its consistent and successful policy. Allow us to disagree even in a lonely way, Araud tweeted, again replying to Ker – Lindsay. 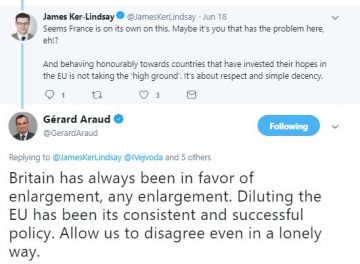 Araud left D.C. in April, where he was well known for his outspokenness and for the flamboyant parties thrown by him and his partner, photographer Pascal Blondeau. In a round of farewell interviews he painted a dire picture of the Western world, with receding multi-lateralism and relationships based on power and interest. The case of Macedonia seems to be no exception. On Tuesday, Macedonia had its request to open accession talks during the summer rejected, with France considered the main opponent of the proposal. Another attempt is planned for October, but no guarantee is made that the French resistance will be lifted by then.

Varhelyi: Accesion talks with Macedonia and Albania could begin after June

Education Minister Arbr Ademi opened the prospect of postponing the start of the school year as the interim Government is undecided over how to approach the coronavirus crisis. The Committee on Infectious Diseases proposed that the classes, scheduled to start on September 1, are held online for all but...
Macedonia 12.08.20 | 14:04