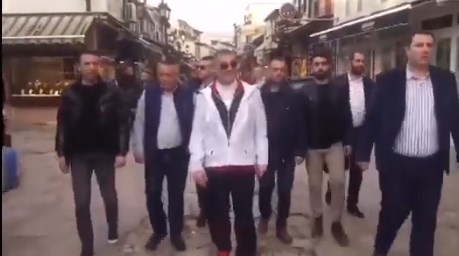 Among the multitude of meetings Turkish mobster Sedat Peker had while in Macedonia is one including SDSM member of Parliament Enes Ibrahim. Peker, who was a wanted man in Turkey and was hiding in Macedonia in 2020 and 2021, took a casual stroll with Ibrahim down the Skopje Old Bazaar.

While in Macedonia, Peker was issued a Macedonian identity card by the Interior Ministry, which is now becoming a growing scandal for the Zaev regime. He was one of a number of regional mafia bosses, and possibly over 200 people in total, who were illegally given Macedonian travel documents that allow you to go across most of Europe. Peker was given a document under an assumed name.

He also frequently met with politicians and businessmen close to SDSM, such as Sefer Canoski, as well as with mafia figures from Macedonia.