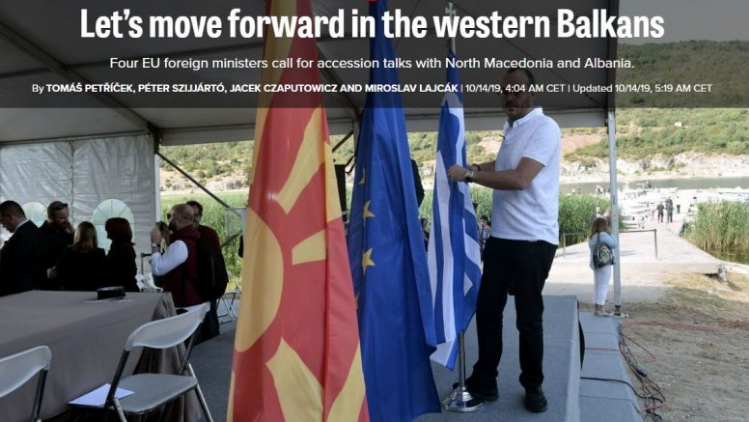 The foreign ministers of the four Visegrad countries – Hungary, Poland, the Czech Republic and Slovakia, wrote a joint opinion piece calling that the European Union opens accession talks with Macedonia and Albania.

Twenty years ago, the disastrous and bloody wars following the breakup of the former Yugoslavia finally came to an end. Significant parts of the region lay in ruins. The new countries of the western Balkans and their societies were devastated and needed a hand in getting out of the quagmire they had sunk into. The EU, itself a result of a peace project, understood that in order to stabilize this part of Europe it needed to motivate the governments of the western Balkan countries to rebuild, reform, and democratize their states and societies. The region also needed to unite around a common goal that would spur cooperation and facilitate reconciliation. That is why the wise decision to promise the prospect of EU membership to all the countries of the western Balkans was made at the Thessaloniki Summit in 2003 — just months after the accession treaties with 10 new EU member states had been signed in Athens, the opinion piece signed by Peter Szijjarto, Jacek Czaputowicz, Tomas Petricek and Miroslav Lajcak, published in Politico, declares.

The foreign ministers insist that Macedonia and Albania met the criteria to open the accession talks by implementing their reforms and, in the case of Macedonia, signing the Prespa treaty with Greece.

By enabling “North” Macedonia and Albania to take the next step in the integration process, the EU will reaffirm its commitment to the stability, security, democracy and prosperity of the region. And it will acknowledge the fact that only through the integration of the western Balkans can the EU be complete and its long-term interests properly safeguarded, the opinion piece adds.

A similar call also came from former Bulgarian President Rosen Plevneliev, who called on French President Emmanuel Macron not to block the opening of accession talks with Macedonia. Plevneliev says that he has always opposed the idea that an EU member state should block the integration of new members for domestic political reasons.