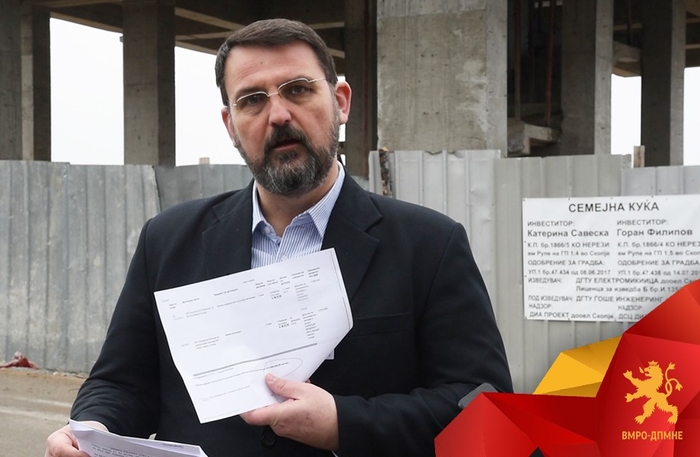 VMRO-DPMNE spokesman Naum Stoilkovski held a press conference at the construction site of a large, luxury villa in a pricey part of Skopje, which is being built by the mother in law of Healthcare Minister Venko Filipce. A co-investor in the development is Goran Filipov, a businessman who has received huge contracts with the Healthcare Ministry under Filipce, and the joint deal implies that the Minister is diverting a share of the contracts his way.

The locals call this build “the Filipce casbah”. Since Filipce became Minister, seven million EUR flowed toward the Synergy company owned by Goran Filipov. Now Filpov is partnering with Filipce’s mother in law, Katerina Savevska, to build this villa. For his part, Filipce confirms that he knows Filipov but says they are not very close friends. How much closer can they get? He gave contracts worth millions to the person who is building a home together with his immediate family?, Stoilkovski said.

Stoilkovski called on the Anti-Corruption Commission and on state prosecutors to investigate this case, after numerous other corruption scandal involving Filipce.