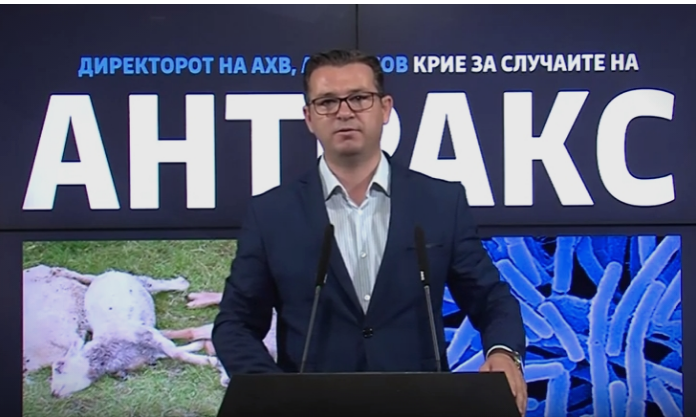 Following the attempts by the Healthcare Ministry to conceal the cases of anthrax among animals, VMRO-DPMNE official Cvetan Tripunovski says that the two weeks delay in reporting the infection has endangered lives. The Ministry only revealed the data about the spread of the deadly disease after the opposition party went public with the cases.

The Government was hiding the cases of anthrax for two weeks. Yesterday the Healthcare Ministry and the Food and Veterinary Agency (AHV) confessed that they hid the fact of the spread of anthrax among animals. This led to delays in the securing of the area near Kicevo where the animals were found, and also to a more lax approach in gathering the necessary samples, as blood and bodily fluids were spilled on the ground. This may lead to contamination for 20 years to come. This lack of seriousness in their approach is a sign of complete disregard for human lives and the safety of the citizens, Tripunovski said.

He called out the head of the AHV agency, reminding him that the agency is bound by law to inform the public of all such instances.

How many citizens may have consumed milk and meat from the infected herd? The Prime Minister Zoran Zaev and the AHV agency director Atanasov must go public and stop playing with the lives of our citizens, Tripunovski added.

Veterinary Faculty confirms that there is anthrax in Macedonia, no cases among their staff

Tripunovski calls on the public to buy Macedonia – grown food