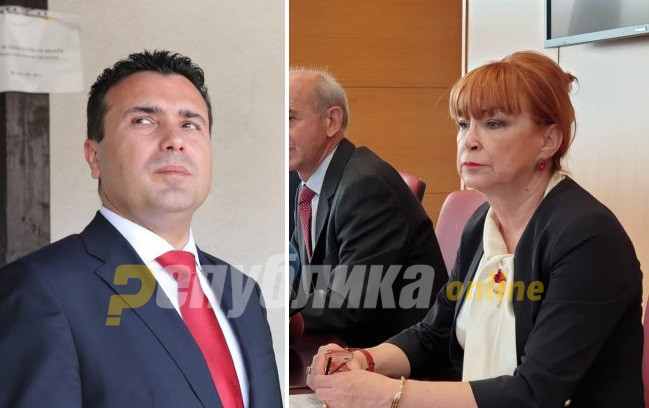 Following a report by the Slovenian Nova24 television, VMRO-DPMNE calls on the state prosecutors to investigate allegations about involvement of Government officials in another major racketeering scandal.

VMRO spokesman Naum Stoilkovski called out organized crime prosecutor Vilma Ruskoska for her inaction regarding the latest revelations in the scandal, in which top Government healthcare officials are suspected of extorting money from a dialysis provider Diamed and trying to cash in on its sale to the Swedish Diaverum company. The Nova24 report, and the additional charges submitted by Diamed owner show that Zoran Mileski – Zoki Kicheec, a person involved in the racketeering scandal that revolves around disgraced Special Prosecutor Katica Janeva was also involved in the Diamed scandal, raising concerns that the Government is involved in mass extortion of businesses.

We have criminal charges against FZO fund director Den Doncev, against Healthcare Minister Venko Filipce, and against Zoki Kicheec. But Prime Minister Zoran Zaev still keeps Doncev and Filipce in their posts. Prosecutor Ruskoska, who should be leading this case, still hasn’t interrogated them. They need to be removed from their posts in order to investigate this scandal, known by now as “Racket 2”, without their obstruction of without having them flee the country. We have a foreign investor who faced extortion here, Stoilkovski said.

He also asked that Ruskoska investigate the claims that an influential person from Strumica was safe-keeping the money from this scandal.

Diamed owner Vera Ivanova, who filed charges against Doncev, Filipce and Kicheec says that she was pressured to stop the sale of her company to Diaverum, and failing to do that, to hand over half of the money she received from the sale. Once she refused, she was told that she will be attacked by state prosecutors and the financial police and that all of the money would be seized, Stoilkovski said during a press conference. “I told them that I will do no such thing, and then, through the press, found out that I’m being investigated”, Ivanova testified earlier.

On top of extorting money from Ivanova, Kicheec was filmed as he, and another accomplice, Bojan Jovanovski – Boki 13 were carrying a bag of money they extorted from businessman Jordan Orce Kamcev. Kicheec was recently released from detention into house arrest, prompting speculation that he is coordinating his activities with Government officials. In both Racket cases it is believed that the money eventually ended up with top officials of the Zaev Government or his SDSM party.