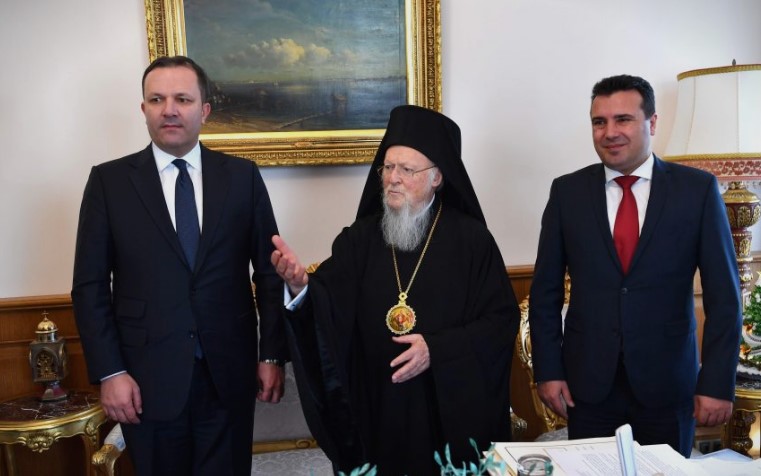 The visit by SDSM party leader Zoran Zaev to Istanbul, where he met with the Ecumenical Patriarch Bartholomew, probably to discuss the long announced but undelivered recognition of the Macedonian Orthodox Church, reminded the public of the embarrassing scene when Zaev agreed to pay a bribe to the Patriarch.

The promise was recorded by Russian pranksters Vovan and Lexus, who were able to develop a long standing relationship with Zaev, duping him that he is in communication with former Ukrainian President Petro Porosenko, NATO Secretary General Jens Stoltenberg, and more recently Greta Thunberg. In one of the recorded conversations, “Porosenko” advises Zaev to pay between 100.000 and 150.000 EUR to Patriarch Bartholomew, telling him that Ukraine paid a somewhat larger sum, and obtained his recognition of the Ukrainian Orthodox Church. In the tape Zaev quickly and readily agrees to do so.

It’s no problem, it’s ok. There will be a donation in cash, normally. We’ll do it, Zaev replies to the Russian comedian who pretends to be Porosenko.

Although he no longer holds public office, Zaev was brought along by his lieutenant Oliver Spasovski, who is now interim Prime Minister, to Istanbul for a meeting with the Patriarch. Having the Macedonian Orthodox Church recognized by at least some of the Eastern Orthodox churches was a major promise by Zaev, as he was pitching the humiliating name change process. But he failed to deliver on it.

The entire Macedonian public and the international community was able to hear how Zoran Zaev talks about the Ecumenical Patriarch. Zaev and Oliver Spasovski are now abusing the state visit to the Patriarchy and are removing the lines between the state and their SDSM party. Receiving an invitation for such a visit is not a party or a personal matter, but an issue of international relations. SDSM clearly considers official invitations as a personal issue, said VMRO-DPMNE spokesman Naum Stoilkovski.

Stoilkovski called on the Government to respond whether Zaev apologized for his bribe offer to the Patriarch.