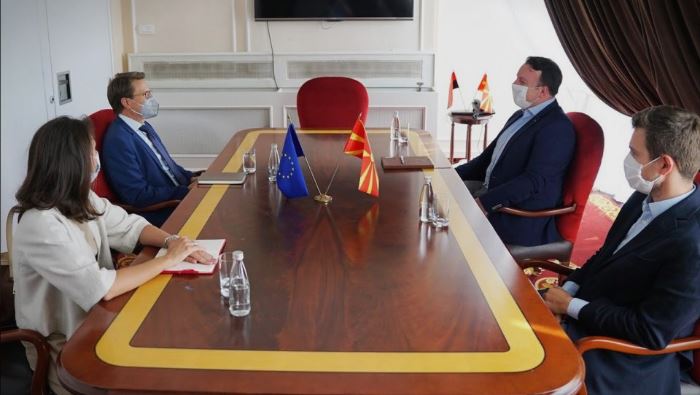 The Vice President of VMRO-DPMNE, Aleksandar Nikoloski and the Secretary for International Policy of VMRO-DPMNE, Timco Mucunski met Monday with the Head of the EU Delegation Samuel Zbogar.

The current political situation and the processes important for the country were discussed at the meeting.

VMRO-DPMNE pointed out that the party is making efforts to form a new parliamentary majority after the elections, and such a process is based on a principled basis and the program commitments with which VMRO-DPMNE participated in the last elections. It is important for VMRO-DPMNE to respect the rule of law and to form a coalition based on the commitments for the integration of the state in the EU, but also a coalition that will respect the laws and the rule of law.

VMRO-DPMNE also highlighted that the elections were held in an undemocratic atmosphere, with serious irregularities, organized bribery and violations of the election rules, which was noted by the OSCE monitoring mission. Such open bribery and brutal trampling of the will of the citizens, supplemented by government officials caught in bribery, for which they are not held accountable due to their affiliation with the prosecution, indicates that the state does not meet the basic criteria for democratic governance and the hybrid regime,highlighted by several relevant international institutions, is fully expressed.

VMRO-DPMNE pointed out that the Republic of Macedonia must make progress on the road to the European Union and to achieve that a new government with legitimacy from the citizens is needed with an agenda for substantial reforms that will improve the lives of citizens and sanction crime and corruption.

Mucunski: Postponing the census for September is the only reasonable solution in the midst of a pandemic