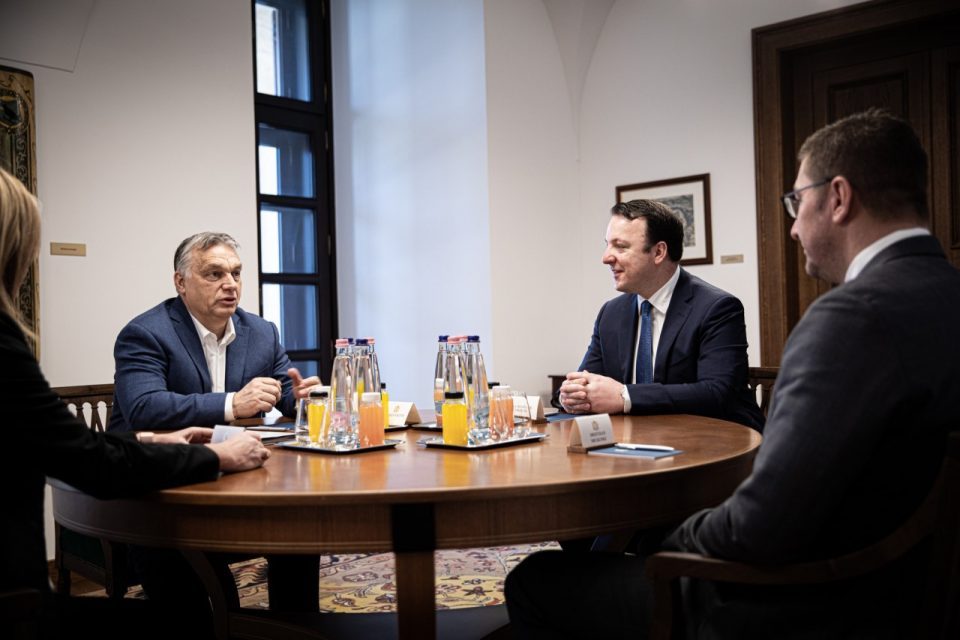 Together with Vice-President Aleksandar Nikoloski we met with Hungarian Prime Minister and leader of the sister party Fidesz, Viktor Orban, in Budapest. At the meeting we talked about the current political situation, the European perspectives of the state and the ways for further cooperation, VMRO-DPMNE leader Hristijan Mickoski wrote on Facebook.

I informed the Hungarian Prime Minister on the worrisome economic and political situation, as well as the high level of criminalization of the society that goes by unpunished and the unwillingness of the Macedonian government to enter into an open fight against corruption. At the same time, I pointed out at the meeting that there is no other such example as the case of Zaev where the Prime Minister boasts of influencing and dictating the decisions of the Supreme Court and the Prosecutor’s Office and without having any legal epilogue or resolution to such a scandal. Given the fact that the current EU Commissioner for Enlargement and Neighborhood Policy Oliver Varhelyi comes from the ranks of Orban’s party, the main topic of the conversation was the insistence and lobbying Macedonia to get a date for negotiations with the European Union. Citizens and the state must not be held hostage to the wrong and destructive policies of Zoran Zaev and his government, no more time to lose and a date for negotiations is needed, with VMRO-DPMNE guaranteeing a serious plan after the elections to implement measures and reforms that will put the country on the fast track on the road to the European Union, and at the same time will make up for lost time. I urged Orban as a member of the European Council to pledge to persuade other EU heads of state to provide Macedonia with a date for starting negotiations. I pointed out that now we are lobbying for a date for negotiations, and after the date we promise a strong capacity to implement reforms that will achieve the European perspective of the country. I also expressed concern over the serious attack on the freedom of the media by the authorities and the restriction of freedom of speech and opinion. The calculation with people with different opinion speaks of the low level of democratic capacity and the fear of the government for the upcoming election defeat. I pointed out that VMRO-DPMNE is open for building bridges of cooperation with the Republic of Hungary, with all states in the European Union and beyond in order to achieve common state and national interests. During the one-day visit to Hungary, whose only agenda was a meeting with the Prime Minister of Hungary, Viktor Orban, we expressed our readiness to deepen cooperation and develop mutual relations, reads Mickoski’s post.