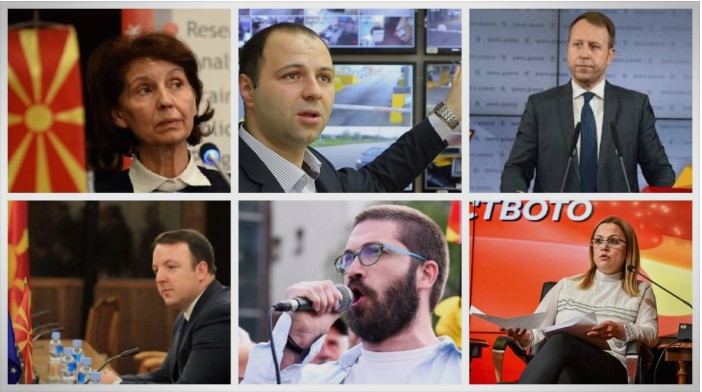 VMRO-DPMNE President Hristijan Mickoski presented the lists of candidates the opposition party is nominating at the coming early general elections. As announced, VMRO-DPMNE will have its 2019 presidential candidate Gordana Siljanovska – Davkova leading the 1st list in the central part of the capital Skopje, while opera singer Igor Durlovski, another candidate who comes from outside the party, will lead the 5th district list covering Bitola and Ohrid.

The two deputy leaders of the party, Vladimir Misajlovski and Aleksandar Nikoloski, lead the lists in the 2nd and the 4th district respectively, while the party Secretary General Igor Janusev is the head of the 3rd list. Dafina Stojanoska is at the head of the 6th district covering the north-west of the country.

We are going for a sure win in the elections. Every generation has its own struggle, and ours is to bring renewal for all, more justice, more principled politics, better living standards and to restore faith that we will succeed, Mickoski said.

Other notable additions to the list include Rasela Mizrahi, the number two candidate on the 2nd list. Mizrahi was nominated by VMRO-DPMNE as interim Labour and Welfare Minister in the caretaker Government, but was removed by the ruling SDSM party, in violation of the agreement governing the conduct of fair elections. Mizrahi faced a torrent of anti-Semitic abuse from SDSM.

Former Foreign Minister Antonio Milososki is second placed in the 5th district, behind Durlovski. Milososki is currently publishing leaked evidence of the involvement of SDSM party leader Zoran Zaev in the Racket scandal and his interference in the judiciary.

Mickoski said that he list is prepared based on polls conducted by the party, chosen for their principles and for their winning mentality. He noted that the lists are overwhelmingly made up mainly of candidates who have not served in Parliament before, and compared the list to that presented by SDSM yesterday, which he said was a list of worn out, failed politicians with loads negative baggage.

This is a long term strategy that we expect to result in the historically biggest electoral win for us so far. We are presenting a list of mainly new people, most of whom were never nominated before, Mickoski said.

Mickoski himself is not running for Parliament. As the party already announced, he is the nominee for Prime Minister. Mickoski made the same offer to Zaev, that Zaev also steps down from the list and does not hide behind parliamentary immunity in case he loses the elections, but Zaev declined this offer and placed himself first on the 4th SDSM list covering his home base of Strumica.

The opposition leader also informed that public that a meeting of party leaders is called up for Thursday, to discuss the effect of the coronavirus on the elections. So far healthcare officials are proposing bans on gatherings of more than a 1.000 people, which may prevent holding the usual party rallies. Mickoski said that VMRO-DPMNE is preparing for the elections and will hold its events well below this number. A number of commentators close to the ruling SDSM party, which is down in the polls and has looked for numerous ways to avoid the elections, have opened the idea of canceling the elections.