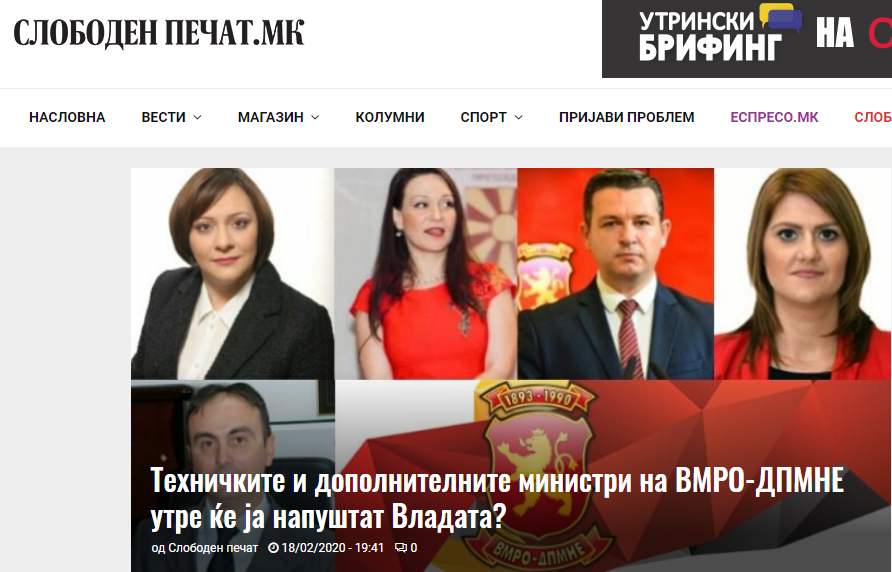 VMRO-DPMNE issued a press release to deny the fake news reports published by media outlets affiliated with the ruling SDSM party, that the caretaker Government is about to collapse.

SDSM began an all out attack on the members of Government that were nominated by VMRO-DPMNE under the 100 days rule, which provides opposition control or veto power over several key departments which SDSM is abusing for political purposes. Labour and Welfare Minister Rasela Mizrahi was expelled from the Government by SDSM, after a campaign of anti-Semitic slurs aimed at her by SDSM activists. Deputy Finance Minister Gordana Dimitreska – Kocoska said that Ministry employees have been banned from talking to her by Finance Minister Nina Angelovska from SDSM or disclosing basic information and reports prepared by the Ministry. Deputy Agriculture Minister Cvetan Tripunovski is facing politically motivated criminal charges from prosecutors linked to SDSM. And yesterday, SDSM linked media outlets published the report that Interior Miniter Nake Culev is about to resign.

This is fake news and it shows the level of desperation in SDSM, which is trying to shift the attention of the public away from the mounting actual scandals that are happening in the SDSM led Government, and from the clear involvement of the Zaev family in the Racket scandal, VMRO-DPMNE said in a press release.

The fake news report about Culev came as he is revealing details about the mismanagement and corruption in the Ministry by former Minister Oliver Spasovski, which left the country without blank passports.

Culev also revealed other corrupt procurement practices and was nervously asked whether the Ministry has additional evidence on the Racket scandal that could implicate Zoran Zaev.

SDSM and the criminals allied to that party should be so lucky to see Nake Culev or any other of the interim ministers resign. But their task is to ensure that Zaev is held to account for his involvement in racketeering. The public can expect to hear more evidence about the way SDSM officials operated in the coming period, VMRO-DPMNE said in its press release.

Culev: All politicians who violated the law will be interrogated