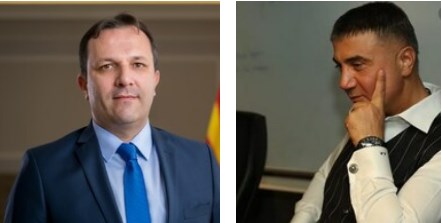 The VMRO-DPMNE party issued a press release to respond to Interior Minister Oliver Spasovski’s attempts to spin the growing “passports for criminals” scandal. The Interior Ministry was revealed by VMRO-DPMNE to have been issuing passports to a number of regional mafia bosses, including Turkish wanted man Sedat Peker and a hitman of the Serbian – Montenegrin mafia who used the passport to carry out an assassination attempt in Ukraine.

Spasovski responded by charging a dozen people, including Interior Ministry clerks, and claims that he was running a years long operation to monitor the group that was issuing the passports. For the duration of this alleged “sting”, mobsters were given passports, used them to travel across Europe, organize their businesses and do hit jobs.

Why wasn’t any of these passports declared invalid if this case was really being investigated. Why didn’t Spasovski at least inform other police services that the documents, like the one issued to Peker, are not valid. Each passport is activated with a fingerprint – only high level Ministry officials can have the passport activated without the recipient being present in person. That means that the ring goes much higher than the suspects that are being paraded by Spasovski. Zoran Zaev and Spasovski are directly responsible for the activities of the criminal groups who were using illicit Macedonian passports, VMRO-DPMNE said in its press release.