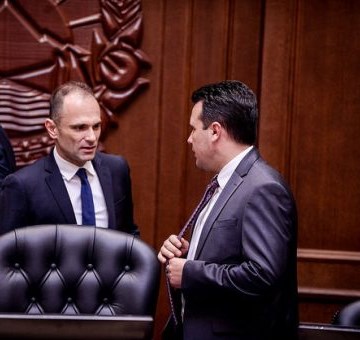 The opposition VMRO-DPMNE party condemned Healthcare Minister Venko Filipce for participating in election videos and other events of his SDSM party, at a time when Macedonia is facing a major Second Wave of the coronavirus epidemic, with record deaths and infection rate.

We have 120 newly infected and four dead patients in just the last 24 hours. June alone had more infections than all other months of the epidemic combined. Macedonia leads the region in deaths and infections per million. And yet Filipce finds the time to act in Zaev’s campaign videos and shows up at election events. This is the height of incompetence and irresponsibility, VMRO-DPMNE said in its press release.

Early in the epidemic Filipce was considered a star, as the infection and death numbers remained relatively low, and SDSM invested heavily in promoting him, including promoting his memes and Viber stickers. The boost of popularity even covered up the numerous corruption scandals the Minister was involved in, but now, with the statistics becoming by far the worst in the region, Filipce’s mishandling of the epidemic as well as his corruption and the corruption of those around him are again front and center.