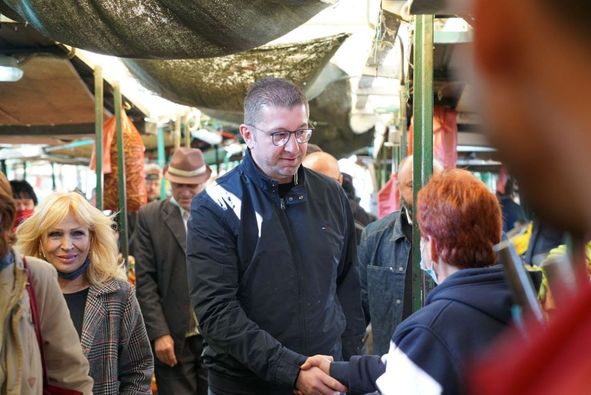 VMRO-DPMNE President Hristijan Mickoski said that he keeps an open door for all other parties and organizations that want to join in the toppling of the Zaev regime, including Levica, which had solid results in the first round of the local elections.

We have an outstretched hand. I will leave it to them to determine what kind of cooperation they want to have with the opposition bloc, whether it will be a formal coalition or if they prefer to just support our candidates in the second round. The protest vote, the vote against the ruling coalition, is at least twice larger than thee one of the SDSM coalition. That is why the Levica voters belong in the largest coalition and I call on them to support us so that we can make Macedonia a decent place to live in, Mickoski said after meeting supporters in Skopje’s Green Market, along with the mayoral candidates in Skopje and Centar, Danela Arsovska and Natasa Kotlar. Both face run-off races against SDSM candidates and hope to win the sizable Levica vote.

Mickoski said that he is also in talks with the Albanian opposition parties, with whom he has a cooperation agreement. “I spoke with Afrim Gashi from the Alternative party and I invited him to have his council members join the VMRO-DPMNE led majorities in the councils where we both won seats. I will meet with Alliance of Albanians leader Ziadin Sela tomorrow”, Mickoski added.