The latest leaked audio conversation proves that Macedonia is ruled by a mafia family, that orders the torching of cars of opposition activists, and decides who gets to do business with cannabis, said VMRO-DPMNE spokesman Dimitar Arsovski, after the shocking leak that came out yesterday. In it, a mobster known as Goran Dimovski – Tusnikot speaks to an important business partner of the Zaev family in Bitola, and discusses the torching of the car of an opposition activist in Bitola who blew the whistle on their corrupt deals involving the state owned REK Bitola coal plant, and also reveals how nobody can enter the recently legalized cannabis business without the Zaev family agreeing to it. Dimovski is heard saying that he is in touch with Vice Zaev, Zoran Zaev’s brother, as well as another family member over the burning of the car of the VMRO activist.

The Republic of Macedonia is ruled by a mafia. What we heard yesterday proves that at a time when Zoran Zaev was Prime Minister of Macedonia, his brother Vice Zaev was directly ordering the burning of cars of his opponents, as a way of sending a message to anybody who would oppose him. it’s not news that the Zaev family was communicating with the underworld, but it is new to us that they were directly giving orders to criminals, to attack someone or to block someone’s business, said Arsovski.

The spokesman for the opposition called on prosecutor Vilma Ruskoska to act immediatelly and to investigate the contents of the leak, of Zaev’s family businesses and their ties with criminals as well as with people in judiciary. Arsovski noted that VMRO-DPMNE Vice President Vladimir Misajlovski was the target of a fire bomb attack in 2017, and recently a bomb attack, aimed at his house and property, and said that these attacks on the opposition just make the matter of invetigating the methods of the Zaev family more urgent. 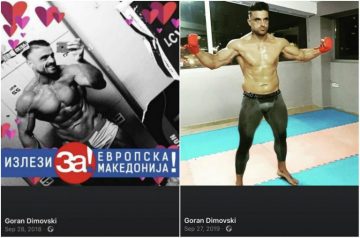 Meanwhile, the Netpress news site published more details about Goran Dimovski. The outspoken SDSM supporter and self-declared tough guy has seven charges, involving usury, fraud and serious theft. His social media shows him in the company of SDSM party officials, but also high profile criminals such as Bajrus Sejdiu, sentenced for cigarette smuggling and Stanislava Cocorovska – who orchestrated what was until recently the biggest cocaine transport linked to Macedonia. In the audio leak, Dimovski says that he waas in touch with both Vice Zaev and Radisa Bojovic, an in-law of the Zaev family, who run parts of the family business.

According to Netpress, the underworld elements linked with SDSM operate around the Omerta security agency in Strumica, which was involved in extortion from various business owners in Zaev’s stronghold of Strumica, and now that the Zaevs run the country, the group has expanded to other cities.

VMRO: Zaev’s “tomato diplomacy” failed, he must resign and allow a broad Government of national unity