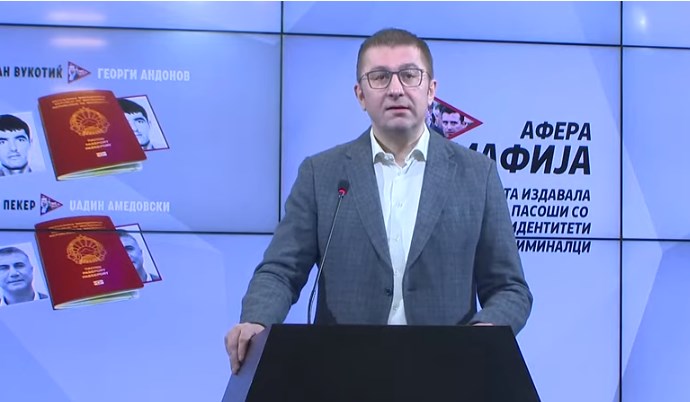 A day after VMRO-DPMNE revealed that two high level regional drug bosses received travel documents from the Zaev regime, the police announced the arrest of a dozen Interior Ministry officials. VMRO leader Hristijan Mickoski held a press conference today, declaring that the arrests are proof that the Interior Ministry was operating in coordination with mafia structures, but also that the links to this criminal racket go much higher than the few officials who are being investigated.

– Let’s not kid ourselves, the criminals are at the top of the Government. The sooner we clear these people out, the sooner we will have rule of law in our country. Anything else is just distracting the public from the real problems, Mickoski said, while noting the recent major drug raids in Skopje which also netted only low level criminals while the suspected ringleaders were tipped off and fled.

The two mafia lords who were given Macedonian travel documents are Jovan Vukovic from Serbia and Sedat Peker from Turkey.

We were informed by whistleblowers that there is an organization within the Interior Ministry that was issuing authentic passports to top criminals under assumed identities. We are informed that there are hundreds criminals who received Macedonian passports, which allowed them to open bank accounts, launder money and travel for the purposes of their criminal enterprises. The scandal has international aspect as the type of criminals who received passports are sought by DEA and Interpol, Mickoski said.

He warned that Macedonia can’t expect to get closer to EU membership while this type of criminal behaviour is enabled by the Interior Ministry and urged the press not to allow the Government to cover up this scandal.

This can’t end with a formal press release and the arrest of several low level enablers and clerks. They can’t insult our intelligence, this would not be possible without the involvement of top Government officials, Mickoski added.