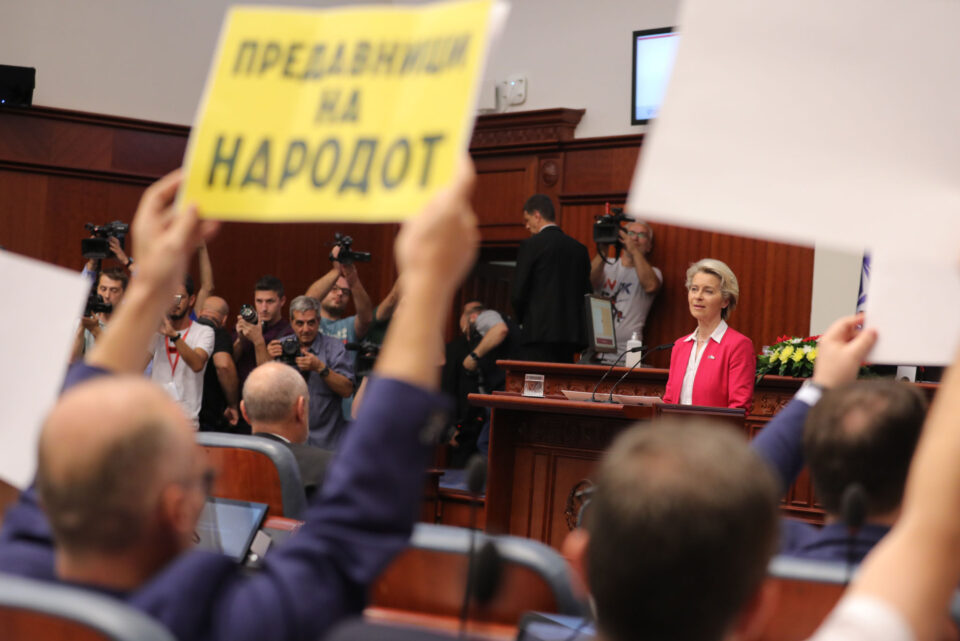 I wanted to be here today among you so that I may speak to you directly, so that you may hear from me how Europe is waiting for you. Waiting and hoping that you will take yet another step towards our Union, said European Commission President Ursula von der Leyen in her address to lawmakers on Thursday.

“Your country is a candidate to become a member of the European Union. Since 2005, many of you here – and many, many more who are absent – have worked hard for Macedonia to become a member of the EU. And only four years later, in 2009, the European Commission recommended that we open accession negotiations with you. Since then, we have consistently stood by your side. And now, finally we could be on the threshold of a decisive step forward. I am here today because I believe that this is the moment for you to move ahead towards our common future. Towards our common future in a European Union with Macedonia as a full member,” said EC President von der Leyen. 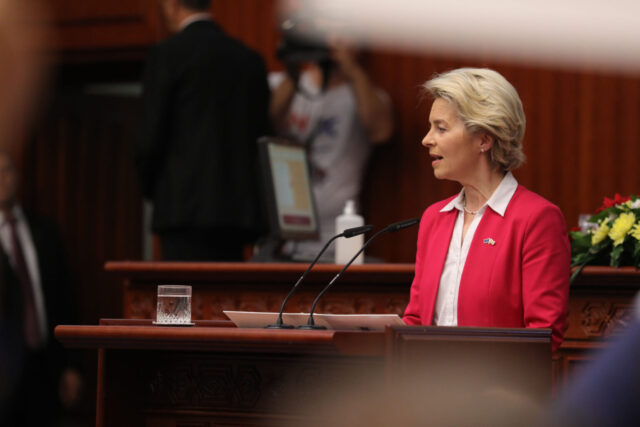 She said the country has shown boldness and determination before through the Prespa Agreement which led to Macedonia becoming a member of NATO, where it has shown that it is a reliable security provider, a real added value to the Alliance.

“I know that the same will happen when you become a member of the European Union. I know this because you have already demonstrated a vital capacity to change your society for the better. Your efforts to strengthen the rule of law to fight against corruption are commendable. You have established a strong record on human rights. You have a free media. You have a vibrant civil society. You are a successful model of a diverse, multi-ethnic society, forged in the historic Ohrid Framework Agreement. You chose a path of peace rather than conflict. And this was the path of peace shown by the late President Boris Trajkovski. He said that he intended ‘to be the President of all citizens […] regardless of their ethnic or religious background, regardless of their political standing.’ He added that he would ‘not allow ethnic hatred and intolerance’ to undermine the stability of your country,” said von der Leyen. 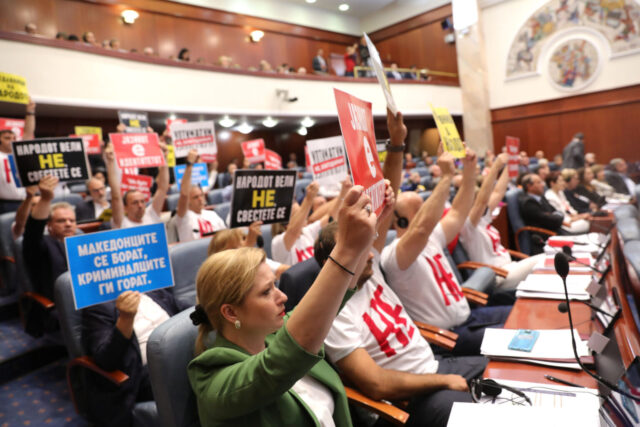 The EC chief said many are understandably frustrated that the country has not yet begun accession negotiations.

“Let me tell you: I am too. The Commission has been recommending the opening of negotiations for the last 13 years. And you will be understandably frustrated that the opening of negotiations with the EU did not immediately follow the Prespa Agreement. This was bitter. But you never gave up. And we never gave up. Together, we followed our dream of one European Union. And together, we will turn this dream into reality,” noted von der Leyen.

According to her, the opportunity must be grasped – to launch accession negotiations and work together on the path that takes Macedonia into the EU. 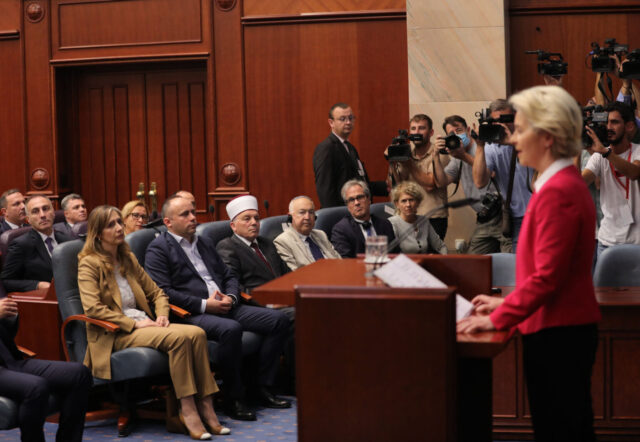 “We can do this as soon as next week, by taking the first step of the revised French proposal. You are all very aware of this revised proposal. It protects your interests and addresses the concerns of all sides. Be reassured that the Commission – that has always stood beside this country – continues to do so today and will continue to be there with you tomorrow and the day after. We are convinced that this is of historic importance. But the decision is yours to take and yours alone. Ultimately, this is about the path you choose, as you have chosen before with the Ohrid Framework, with Prespa, with the building of your vibrant democracy,” said von der Leyen.

Should Macedonia decide to endorse the revised French proposal, a political Intergovernmental Conference will be held within the next few days.

“We, the Commission, will then start immediately the process of screening the acquis. This is the first step in the negotiation process. We will then be glad to welcome your negotiating team to Brussels to start working together,” noted von der Leyen.

Dear Macedonians, she added, I have listened carefully to the concerns expressed regarding the Macedonian language and identity.

“There can be no doubt that the Macedonian language is your language. We fully respect that. That is why the revised proposal refers to the Macedonian language, without qualification by the EU. The proposal also respects your national identity. The principle of self-identification is important for each one of us. You can count on me, as President of the European Commission, to ensure that the accession process will strictly abide by European principles and standards. Yours is a successful multi-ethnic society. It mirrors the EU’s motto: ‘United in diversity.’ You have shown commitment to the rule of law, the protection of human rights and the rights of all communities. These are values that we share. Amending your Constitution to advance fundamental rights further will reinforce your commitment to these values. And then, this will automatically complete the opening phase of the negotiations. It will trigger another Intergovernmental Conference, without further decision,” stressed von der Leyen.

The EC President said good neighbourly relations and regional cooperation are part of the DNA of European integration.

“These are also essential elements in the enlargement process, as well as the Stabilisation and Association Process, for all enlargement countries. Let me reassure you: Bilateral issues, such as interpretation of history, are not conditions in the accession negotiations. Some say, it would be better to wait for a better deal than the one presented by France. It is, of course, your right to do so. But consider how hard we have tried to get here through successive Presidencies – Germany, Portugal, Slovenia and now France. I encourage you to seize this opportunity. By opening this door now, Macedonia empowers itself by being in the negotiation process rather than out of it. Benefits will accrue as you progress. Investments, improved trade links, closer collaboration in key sectors such as energy and transport. New good jobs, business opportunities. This is what the young generation wants. They love their country. They want to build their future here. They are willing to work hard for that. But they need the opportunity. Let us open the next important door for them. I have children, I have one granddaughter. Many of you have children, some of you have grandchildren. All of us together want – one day – to look back and say: They are all part of the same European family. This is the future you are deciding about here – today and tomorrow,” said von der Leyen.

She also referred to the difficult times the world is in, including Russia’s brutal war in Ukraine, the COVID-19 pandemic, soaring energy prices, escalating climate crisis.

“These are daunting challenges that we must face together. But we can master them. We will master them – together, as strong democracies, as one Union. Your country has risen to the occasion. You stand steadfast with the Union. You are a true and reliable partner. You have shown your determination to the EU values. You deserve to move forward on the path to membership. The decisive step forward is now yours to take,” said von der Leyen.

She concluded her address with another quote from late President Trajkovski:

“I consider two things, on a daily basis: what is right to do and what is wrong to do […]. According to my conscience, I am trying to abide by the right thing. My vision is peace. My vision is prosperity.’ I fervently hope that you too will do the same. Do the right thing for the peace and prosperity of Macedonia, a soon-to-be member of the European Union. The future of your country is in the European Union. And Europe is not complete without Macedonia. We want you in the EU!,” said EC President von der Leyen.

The Parliament session was attended by President Stevo Pendarovski, Prime Minister Dimitar Kovachevski, and senior officials from the country and abroad. 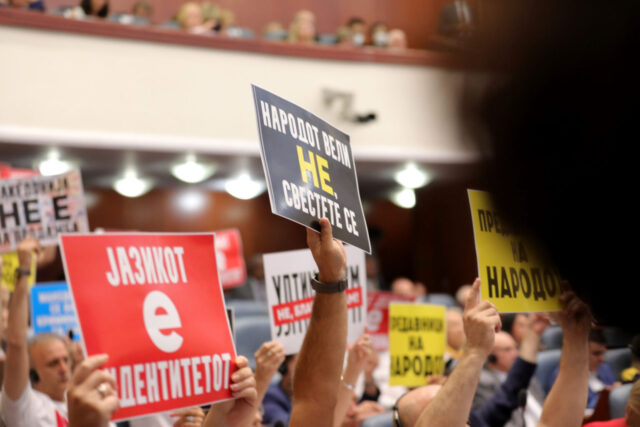 During the session, opposition MPs held up signs against the French proposal and the incumbent authorities.

The Parliament is set to hold a session focused on the Report over the content of the draft-negotiating framework for the accession negotiations of the Republic of Macedonia with the European Union, proposed by the French Presidency on 30 June 2022, and adopt conclusions that will serve as tasks that the Government will have to observe in the process of EU accession negotiations.

Mickoski after meeting von der Leyen: I showed her pictures of the Vatasha boys, Vera Ciriviri Trena, the deportation of the Jews: Shall we accept that they are administrators?!