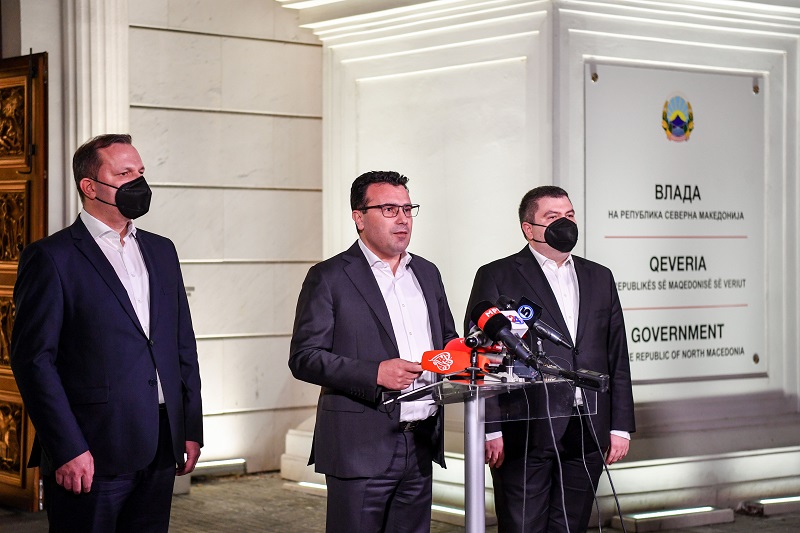 Macedonians have been accustomed to crazy twists and turns in the political scene and serious security crises but even by the standards of the past six years, the past three days were a bit too much.

Some chaos was anticipated as it became clear that the court will make a ruling in the large Target wiretapping case this week. This is the ur-case of the 2015 political crisis as it is supposed to investigate the warrantless wiretapping of tens of thousands of phone lines that were apparently conducted for years and possibly decades back by the UBK police service – the heir to the communist era UDBA police. The tapes somehow made their way to then opposition leader Zoran Zaev, who used them to blackmail Prime Minister Nikola Gruevski alleging that they show serious violations on teh part of Gruevski and his top officials, including his cousin and UBK chief Saso Mijalkov. The case originally had Zaev, several UBK technicians and former UBK chief Zoran Verusevski as defendants – the technicians were accused of working with Verusevski to wiretap the phones of Gruevski, Mijalkov and many others, and then editing and giving the tapes to Zaev.

But as prosecutors loyal to Zaev were appointed as part of a political deal brokered by the US and the EU, the case was turned on its head, and instead of Verusevski, Mijalkov was blamed for the wiretapping. He was nominally in charge of the sercret service, but the charges didn’t explain why Mijalkov wiretapped himself, Gruevski, other VMRO officials, and how did Zaev get the tapes.

In any case, Mijalkov faces up to 13 years in prison, while Gruevski received political asylum in Hungary citing the persecution campaign against him launched by Zaev. Even though he was charged with numerous other politically motivated cases, Mijalkov was not detained or placed under house arrest. In fact, he was allowed to freely operate out of the Marriott hotel in downtown Skopje which he de-facto owns, as over the years he moved from a top VMRO official to a major supporter of the Zaev regime – Mijalkov helped Zaev coral former VMRO members of Parliament to vote for the imposed name change in 2019, and since then worked to create factions in VMRO – trying to weaken the new party leader Hristijan Mickoski. All this helps Zaev immensely, and the public realized that the promises of “justice” and “rule of law” made during the Colored Revolution will give way to political expediency.

Zaev’s Gang of Eight tries to create fissures in VMRO

On Sunday afternoon, the prosecutors ordered Mijalkov’s house arrest, in light of the fact that the day of his sentencing is drawing near. Macedonia just had a horribly bad corruption report issued by Transparency International and even the US Embassy – greatly supportive of the effort to rename the country and the characters involved in making it happen – began protesting the slow pace of corruption investigations. Rumors that Mijalkov may actually be sentenced began to grow. A frantic, last minute attempt by his supporters (known as the Marriott coalition) on Saturday to stage what they called a VMRO party congress to put additional pressure on Mickoski came to nothing – several dozen former party officials, many of them badly discredited in the public by Zaev’s wiretaps, gathered to support the call, while on the same day the party leadership collected tens of thousands of signatures across the country to support its initiative to end the planned census – it was clear where popular support stands. 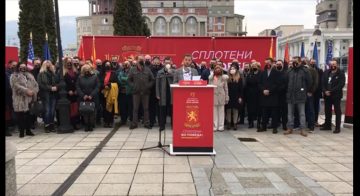 And so on Sunday afternoon, reports began to spread that the police is patrolling the area around the Marriott hotel, as well as several homes Mijalkov owns across the city. By the evening it was clear that the former police chief has gone missing. Social media boiled as the news spread – Zaev continues to face allegations that he allowed Nikola Gruevski to leave the country, and now Mijalkov too? A popular meme showed the Macedonia Gate – where Zaev promised he will erect an electric counter showing all the money he will confiscate from Mijalkov and his businesses – with a counter saying “the cousins” – 2:Zaev – 0. And while Gruevski did not support the imposed name change or Zaev’s efforts to divide VMRO, Mijalkov’s political actions and alleged business ties with Zaev’s brother Vice fanned the allegations that he was allowed to leave the country. This especially after a recent leak showed that Zaev and Mijalkov were conducting back door negotiations during the Colored Revolution – while Gruevski was still in office – and apparently continued to manage political developments in Macedonia ever since.

The outrage spread across the political divide. Conservative commentators insisted that this is the final piece of evidence about the coalition between Zaev and Mijalkov that is evident in the vote for the name change, impunity for numerous actual criminal deals, and the blatant attempts by Zaev to use Mijalkov to create a faction in VMRO. Leftists and Colored Revolution activists were faced with yet another in the long line of humiliations, especially after the arrest of prosecutor Katica Janeva in whose defense they marched (in a major corruption case that – of course – involved Mijalkov). Both sides agreed that the few cases that did result with arrests and long sentences – especially the sentence for the protesters who entered the Parliament in April 2017 to prevent the creation of the Zaev Government (unaware that Mijalkov is already in talks with Zaev about the outcome of the political crisis), the frequent detentions of former Transportation Minister Mile Janakieski and the arrest of former Interior Minister Gordana Jankuloska – should be seen as a total sham. A call to release Jankuloska and the other political prisoners and end the mockery of justice that is being done in the name of the Colored Revolution spread widely across the social media.

Even more incredible was the refusal of Zaev to resign or even appoint a “fall guy” for Mijalkov’s escape. His Interior MinisteR Oliver Spasovski disappeared for two days, even as the crisis grew, and only gave a press conference on Tuesday. During this, he refused to resign and announced that Mijalkov is probably still somewhere in Skopje (rumors were spreading that he may try to get to the Czech Republic, where he holds a citizenship from the days when his father Jordan Mijalkov was a trade representative) or any of a number of other countries and territories. Prosecutor Vilma Ruskoska, who engineered the collapse of Katica Janeva in the Racket scandal, began to sharpen her knife and publicly accused Spasovski for Mijalkov’s escape.

Zaev’s coalition partners began accusing him of total incompetence, or worse, and suddenly the coalition began to look even shakier than before.

And then, on Tuesday afternoon, just a few hours after Spasovski’s press conference, an energetic looking Mijalkov showed up before Ruskoska’s office. In a clearly staged entrance, the man who usually never leaves home without a heavy security presence, walked alone to a handpicked reporter who asked the now iconic question: “Mister Mijalkov, you are in Macedonia?” An incredible story followed – Mijalkov claimed that he got a bad fever, went in isolation because he feared to infect people with Covid (which he already claimed he had in October) and left his communication devices so he was unaware that the entire police force is looking for him. “I apologize for any confusion I may have caused”, he said, causing a universal shout of “oh, come on” heard across the country.

Prime Minister Zaev isused a triumphant statement, declaring that he went so hard on Mijalkov, threatening his sons, bother and family businesses, that he had no option but to abort his planned escape and turn himself in. Few people are buying it. More likely that another escape would have ended any hope for Macedonia’s EU integration, giving a perfect excuse to the enlargement skeptical countries, and would have destroyed any remaining hope to present the country as a place where minimum standards of the rule of law apply, and that this prevented Mijalkov’s arrangements to leave the country.

Focus is now on the sentencing. Prosecutor Ruskoska suddenly found her soft side and did not request a detention – only a comfortable house arrest. Prosecutor Lence Ristoska (from the disgraced Janeva unit) is requesting 13 years in prison for Mijalkov over the wiretapping allegations, and in a matter of days we will know if another deal may be struck through the courts – to keep Mijalkov politically useful to the Zaev regime but still nominally convicted and punished for the myriad of crimes that Zaev and his fellow colored revolutionaries tried to pin on him and the rest of the VMRO in 2015.