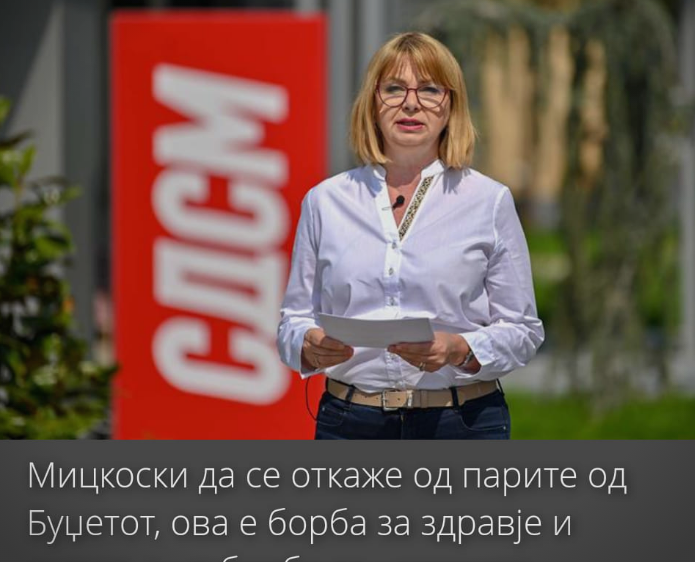 VMRO-DPMNE gave up on the public funding that is shared between political parties, and rejects the on-going public relations campaign led by the ruling SDSM party, said party spokesman Naum Stoilkovski. The bigger parties are entitled to share more than four million EUR between themselves.

For days, media outlets linked to the ruling SDSM party are spreading fake reports that VMRO is allegedly objecting to the proposal to withhold the funding that is given to political parties, based on their share of votes. Journalists close to the Government keep calling out VMRO officials on the issue and insinuate that they demand that the party is paid, despite the dire financial situation in Macedonia caused by the coronavirus epidemic. SDSM spokespersons are also holding daily press conferences on the “issue”.

VMRO-DPMNE reminded the Government that it has power given under the state of emergency act to end this budget item right now, even without waiting for the Parliament to reconvene or for the next elections, but said that SDSM would rather use the issue as part of its public relations campaign than make the simple move of amending the law. As the ruling party, SDSM can easily appoint its officials to well paid posts across the public service, and given the series of racketeering scandals, the ruling party is also using its power to enrich itself, making the public funding much less important for its day to day operations.

We publicly gave up on our share of the funds a week ago but SDSM pretends they don’t know about this and keep abusing the issue. While we wait for them to acknowledge our move we call on them to have their officials like Renata Deskoska, her son in law Nikolce Tasevski, Radmila Sekerinska, Damjan Mancevski, Mila Carovska, Robert Popovski and Nikola Dimitrov give up their salaries that range from 70.000 to 188.000 denars and begin working pro-bono for their country, Stoilkovski said.

The budget deficit is estimated to be at between 1.3 and 2.2 billion EUR, depending on how bad the expected economic downturn turns out to be.