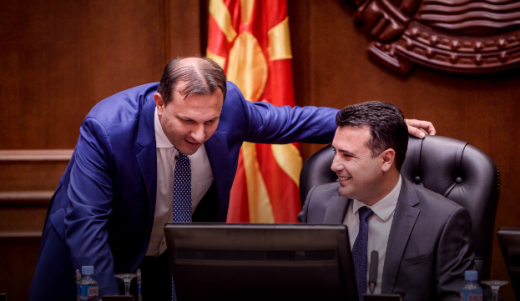 Doctors will decide who will get a passport. Bravo, is it a real reform. It’s easier to get a Bulgarian than a Macedonian passport, these are just some of many reactions to the problem facing the country – a country without passports, IDs, driver’s licenses. Social networks are full of comments and objections.

Citizens demand responsibility from the authorities. And they just toss the ball between each other… Oliver Spasovski is the man who should answer all the questions. He was until recently a minister of the interior, today as an interim prime minister denies knowing what was going on in the department he ran for nearly three years.

“I don’t know”, “It’s not my responsibility”, “Culev is responsible for that”. This is how Oliver Spasovski answers passport-related questions. The question arises – is this problem deliberately created, knowing that with the interim government this position is given to a man from the opposition. Is it realistic that Cule made this mess given that this problem has been around for a while and he is not even two months in the position?! Templates were supposed to arrive when Culev assumed office at the MoI. This shows all accusations against the new Minister of Interior to be wrong.

The incumbent interim interior minister, Nake Culev, announced immediate investigation into the case and responsibility for those who allowed such a problem to occur.

Regarding the reports of certain media outlets for abuses in the process of procuring passports, what I can confirm at the moment is that an internal procedure is underway within the Ministry of Interior to determine whether there are certain elements that indicate possible abuses in the procurement of travel documents. Any inconsistencies that will be identified will be followed by an appropriate procedure for which the public will be duly informed, Minister Culev said.

Even more ridiculous is Spasovski’s statement that he learned about the problem with his passports a week ago, while citizens have been complaining about it for at least a month.

The Government was informed about the passport situation a week ago. I think that better management, the way the institution works, more dealing with the essentials than with the unimportant issues, would not lead to such a crisis, said Prime Minister Spasovski.

There must be accountability for such cases, but the public must also know why Oliver Spasovski, as interior minister, has now allowed such a problem to happen, and for many years there has been no such problem with a lack of passports.

Do Spasovski and SDSM want to deliberately attribute this problem to Nake Culev and does SDSM with these actions want to announce to the citizens the black campaign during the election campaign?