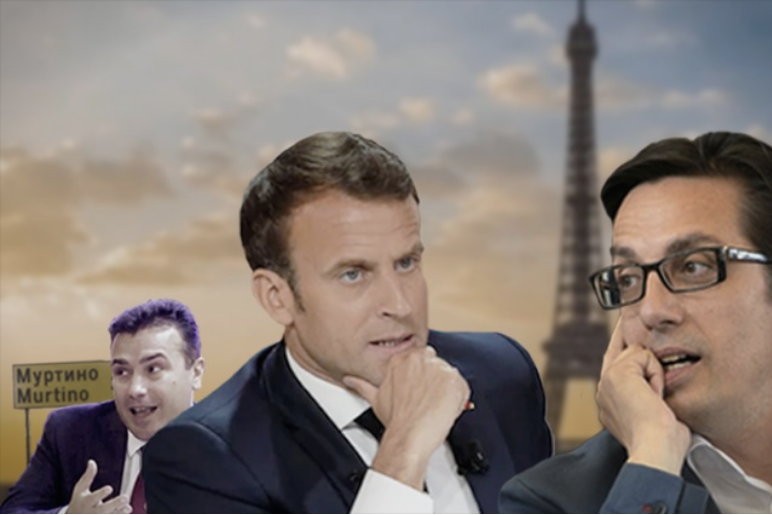 The French president for five months refuses to meet with Prime Minister Zoran Zaev, and immediately agreed to meet with President Stevo Pendarovski as early as next Tuesday. “Lider” analyzes: Why does Macron refuse to meet with the “toxic” Zaev?

The prime minister himself confirmed last month that he had been waiting for four months to meet Macron, but he refused his requests.

For four months, I have been requesting a meeting with the French President Macron, through the French Ambassador Thimonier and the Macedonian Ambassador to France and other diplomatic channels, but I have not received a response so far. I want to meet with Macron, he is our great friend, Prime Minister Zoran Zaev said on October 19.

According to Croatian journalist Ivan Brodic, who closely follows developments in the European Union, it is logical that Macron would prefer to meet Pendarovski instead of Zaev – because the president, unlike the prime minister, reacted sharply to the “Racket” case.

Remember, Pendarovski reacted very sharply to the possibility of corruption at the government leadership in the “Racket” case. He demanded that all responsible be punished. Perhaps that part of the answer to your question may be hidden,  journalist and analyst Ivan Brodic told “Lider”.

The analyst added that when Slovenia blocked Croatia’s accession to NATO, then the US diplomacy threatened Slovenia by refusing credit reprogramming and so the blockade fell. According to Brodic, this anecdote shows that NATO is a geostrategic alliance. Unlike NATO, the European Union is value creation.

It is completely unthinkable for the EU to admit countries where the very government leadership is very close to the biggest corruption scandals and in which political opponents are sentenced to higher prison sentences than returnees from the Islamic State, Brodic analyzes.

According to him, it is very tragic what has been happening in our country for the last three years.

The latest set (meaning SDSM and Zoran Zaev) has devalued European standards in a country that, as a reminder, was the first in the Balkans ready to join the Euro-Atlantic integration, Brodic says.

The longtime political actor Nikola Srbov shares a similar opinion, who reminds that the French ambassador Timonier has repeatedly, in a very direct way, alarmed about what is happening in Macedonia.

The refusal of French President Macron to meet with Zoran Zaev is the result of criminal-corrupt affairs that came to light during that period, with indications that the government leadership was directly involved. We must realize that the president of one of the world’s leading states, in this case, the French president, is quite well informed about the developments, especially of such major affairs. On the other hand, President Pendarovski was sidelined by those events to the point of holding a rather fierce pre-conference on the topic immediately after the affair came out, Nikola Srbov told “Lider”.

As an additional reason why Macron refused to meet Zaev, Srbov cites the fact that the Macedonian government is doing absolutely nothing in the context of those indications of a deficit in European values.

On the other hand, analyst Stefan Vasilevski of the Conservative MK political center claims that Pendarovski has skillfully manipulated his “meeting with Macron”, given that it will happen on the sidelines of the “Paris Peace Forum”.

The Paris Peace Forum aims to strengthen global policies with an emphasis on multilateralism. As a host, Macron will receive all guests including heads of about 30 countries. Pendarovski skillfully manipulates this moment to sell it as talk of our European integration. Zaev, on the other hand, is not aware that serious politicians do not change their positions easily and hence I do not understand why he requested a meeting at all. He simply had homework for a date that he didn’t do, Vasilevski told “Lider”.

In the end, whether Pendarovski got the meeting on the sidelines of the peace forum or he was honored by his French counterpart, the fact remains that Prime Minister Zoran Zaev is practically boycotted by the leader of one of the most powerful EU countries.

After Macedonia was left without a date for negotiations, it was announced that Macron would visit the country, but French Ambassador Christian Timonier practically buried Zaev’s hopes of meeting Macron, saying that if his president came to the country it might mean interference in the pre-election process.