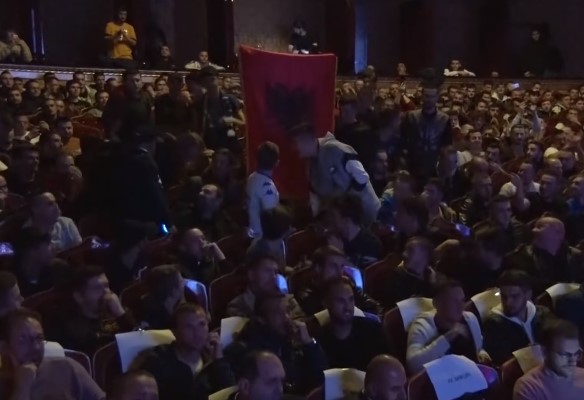 “You Have No History” and “Ethnic Albania” are just some of the chants heard at the Macedonian National Theater, where the “Shverceri” (smugglers) football group” celebrated with displaying nationalist banners and Albanian flags.

So far, as usual, responsibility is still shifting from one institution to another.

The Government says that the event was not organized by any state institution and must not in no way be associated with the government event marking the Albanian Alphabet Day, which took place before the screening of the documentary about the 30th anniversary of the “smugglers” group when the incident happened.

No state institution was the organizer of the event in MNT, the government says

Outgoing Prime Minister Zoran Zaev, who previously attended the event, says the state celebration of the 111th anniversary of the Albanian Alphabet Day was divided into two parts.

Outgoing Prime Minister: I was told there was a second part of the event for young people

MNT Director Simona Ugrinovska explained that the Government, ie the Ministry of Political System and Inter-Community Relations, organized only the central event – the solemn academy on the occasion of the Albanian Alphabet Day, while the event where the incident took place was only announced among other events planned for the celebration.

We were not informed that the second event would be in such a frame. It was announced that there would be a screening of a documentary on the same occasion – the Albanian Alphabet Day. We did not even know until the last minute that the documentary was not in the context of celebrating the Day, that it was a completely different topic and we did not even know that football club fans were invited, said Ugrinovska.

There is no official statement from the theater yet.

MP and Chairman of the Parliamentary Committee on European Affairs Artan Grubi and Minister of Education and Science Arbr Ademi see nothing controversial in the celebration.

Ademi: If there was no hate speech, we can celebrate as we wish

Rampage is the storming, beating and chanting in Parliament on April 27, not the celebration of football fans, where chanting, singing is expected, but not vandalism, which I would condemn at any moment, Grubi said.

Police were present during the incident but did not intervene. Only today, three days later, a forensic team is investigating the scene.