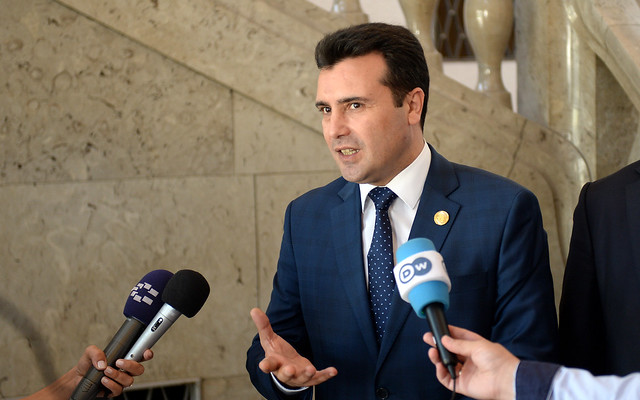 In an interview with the Frankfurter Allgemeine Zeitung, Zoran Zaev reminds Germany that it made a promise to allow Macedonia to open accession talks if the name is changed. In the interview, published shortly before Zaev’s meeting with Chancellor Angela Merkel in Berlin, he also claims that he has received positive feedback from France and the Netherlands, two other holdout countries.

Chancellor Merkel visited us on our Independence Day to deliver this message, Zaev adds.

With the blockade of Macedonian EU accessions now coming from France and the Netherlands, even Germany, and not Greece, Zaev claims that in his talks with French President Emmanuel Macron he was told that France will not comment publicly on the issue, but wants to look positively on the case. Zaev adds that Dutch Prime Minister Mark Rutte also had positive messages for him.

If the accession talks fail, Zaev repeats his threat to hold early elections which, he says, will strengthen the conservatives in Macedonia, or as he says “the radical nationalist forces”.

Zaev was asked whether he fears that the likely new Greek Prime Minister Kyriakos Mitsotakis, who is an opponent of the Zaev – Tsipras name deal, blocks Macedonia from opening EU accession talks, and immediately reminded the journalist that there are steps Macedonia still hasn’t taken to implement the “new name”.

Parts of our agreement with Greece still need to be implemented, such as the issuing of passports and other documents with our new name, and the revision of the history books. This can lead to complications in our accession talks at any time, Zaev told the FAZ.