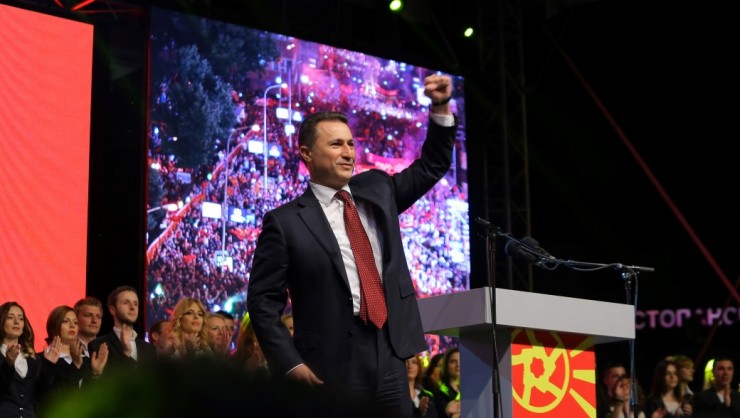 Former Prime Minister Nikola Gruevski was sentenced to another prison term yesterday by the Skopje Appeals Court, over a (non) incident in 2013. Protesters gathered before the Centar municipal building in Skopje to decry plans by the SDSM led Council majority to end the construction of a church in downtown Skopje. A few windows were broken as the protesters chanted during the meeting of the Council, but no injuries were reported. 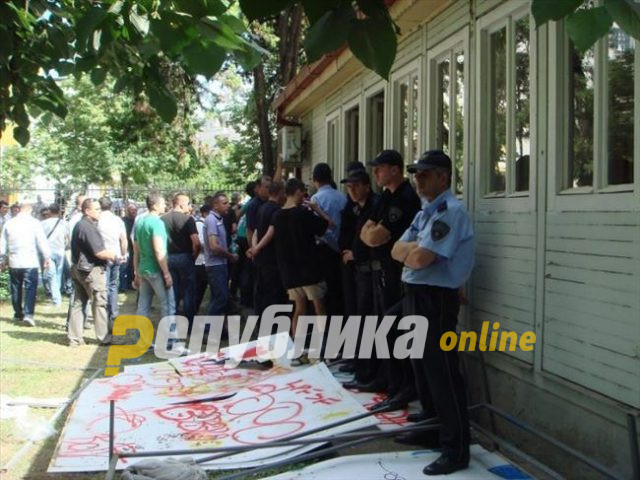 Still, illegally recorded wiretaps released by the SDSM party as part of their 2015 Colored Revolution showed that Gruevski allegedly wanted to have then Centar Mayor Andrej Zernovski attacked. This didn’t happen, and the content and context of the recording are doubtful, but still the courts, under total control of the Zaev regime, handed another sentence of 1.5 years in prison to Gruevski, who is in political asylum in Hungary.

The case was widely criticized by legal experts, for its numerous violations of criminal law, starting with the fact that the crime – violent attack on municipal officials – did not happen. 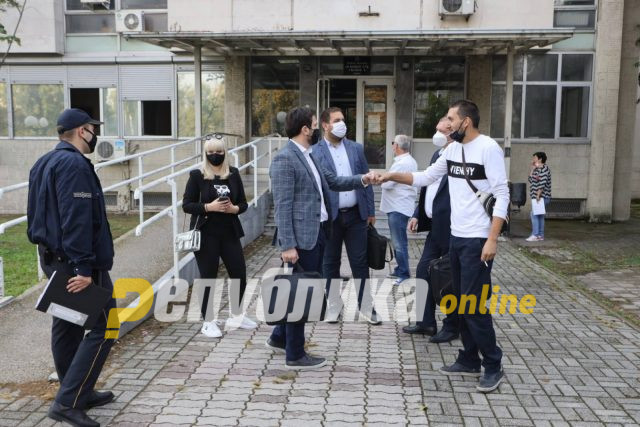 Gruevski is already sentenced to two years in prison for the purchase of an armored Mercedes vehicle, that remains in use to transport visiting foreign dignitaries. The former Prime Minister and VMRO leader cited clear plans to have him killed in prison as one of the reasons why he left the country in 2019. The claim seems very plausible – his two former ministers Mile Janakieski and Spiro Ristovski were brutally assaulted in early 2019, the same day when they were detained in the Sutka prison on a similarly politically driven charge. The Zaev regime had them placed along with members of the Albanian terrorist group that carried out the attack on the city of Kumanovo in 2015, who have declared their intent to bring down Gruevski’s Government. 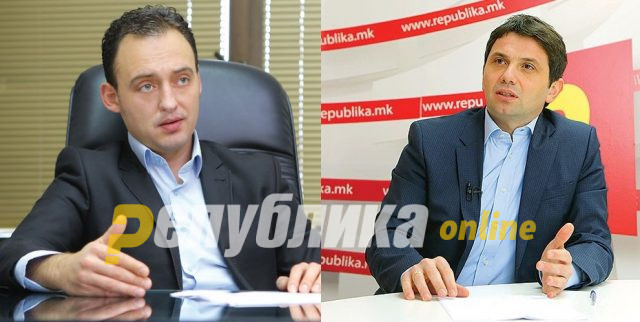 The sentence in the first instance in the Centar “attack” trial was handed down by judge Dusan Josifov, who reportedly had clear indication that he will be dismissed from office if he doesn’t sentence Gruevski. The Appeals Court sentence was delivered by judge Lidija Dimcevska, but under strong influence from judge Tanja Mileva – who is the wife of an SDSM party official and a close friend of the Zaev family. The case had a judicial council appointed. Judge Gjoko Ristov, who was on the council, is close relative of former SDSM appointed Finance Minister Nikola Poposki, and has been promoted under the Zaev regime.

The council also included judge Lirie Elezi Ajurulau – her father is a former prosecutor from the village of Zajas near Kicevo and is a close friend of DUI party leader Ali Ahmeti, who comes fdrom the same village. Ahmeti’s appointees staffed the Supreme Court as well, which confirmed the first prison sentence against Gruevski in the Mercedes case.

Ahmeti is apparently angling to get more influence in the Zaev Government, to gain an extra Government department, and in exchange is using his influence in the judiciary to give Zaev another prison sentence against Gruevski, people involved in the trial observed after the sentencing.

The incident in the Centar municipality was almost identical to the protests a year before, in 2012, when VMRO-DPMNE had majority in the Centar Council put to vote a proposal to change dozens of street names, most of them left overs from the Communist regime. SDSM protesters similarly banged on the windows, shouted at the Council members and chanted “Bulgarians, Bulgarians”, in an attempt to claim that some of the anti-Communist historic figures honored in the proposal, like Todor Aleksandrov, are ethnic Bulgarians. No charges were filed over this incident, which only shows how politically driven the case against Gruevski is. 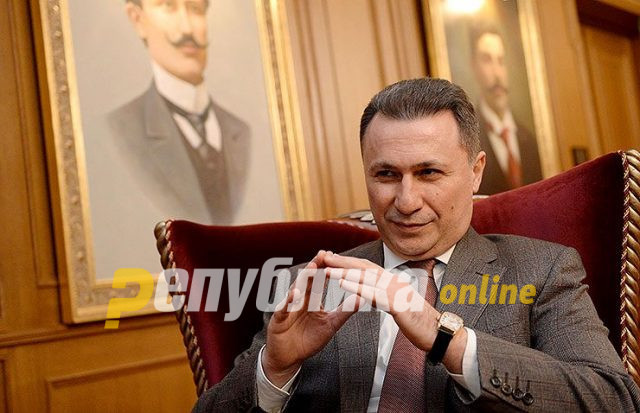 Not to mention the SDSM conduct during the 2015 Colored Revolution, when their protesters, riled up by illegal wiretaps, smashed into and set fire to an office of President Ivanov, and vandalized monumnets across Skopje for months. Over 40 police officers were injured during the frequent violent protests, in which SDSM thugs hurled rocks, sticks and other projectiles at the police. By contrast, the few windows broken during the 2013 Centar municipality protests were estimated to cost no more than 400 EUR, with no injuries.
Gruevski was not present during the 2013 protest, but then Mayor of Centar Andrej Zernovski from SDSM said that “he felt his spirit” at the rally – which is a curious legal standard to be accepted by the court. The protesters were called for by Bishop Agatangel, who asked them to help ensure the restoration of the St. Constantine and Helena church that was destroyed by the Communist regime. SDSM obstructed the rebuilding of the church at every step of the way, and it remains unfinished to this day. 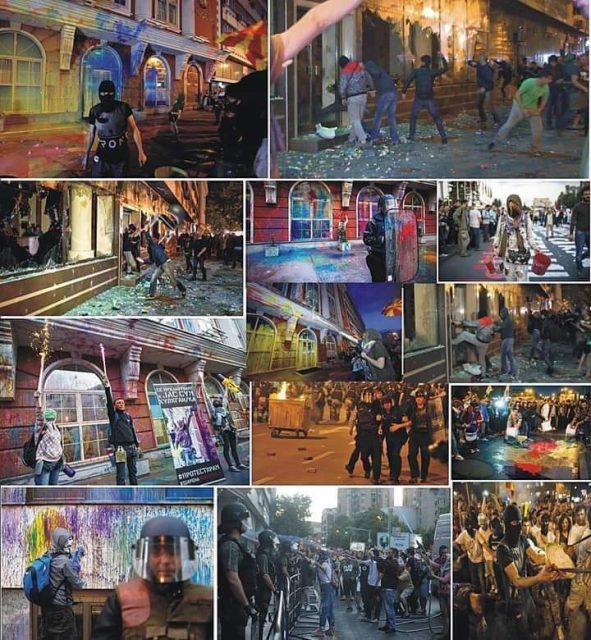 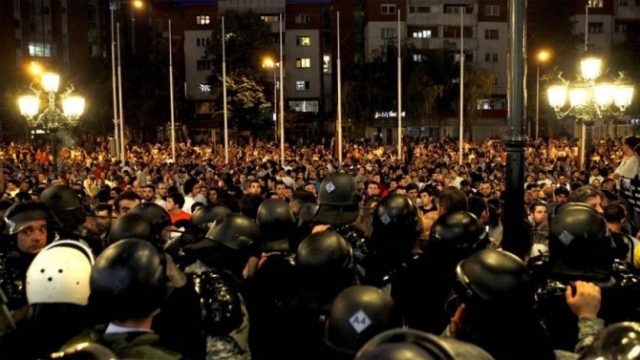 The key wiretap cited by the prosecutors, from the now fully discredited Special Prosecutor’s Office, contained a conversation allegedly between Gruevski and Mile Janakieski, which sounds like it is made in the heat of the moment. There is no evidence that anybody followed up on the alleged demand by Gruevski that Mayor Zernovski “is slapped” during the protest. The law forbids the use of warrantless wiretaps, whose origin and context is uncertain, as evidence. But this principle is frequently violated by the Zaev regime during its numerous trials of VMRO-DPMNE officials. In at least one of these cases, it was proven that the tapes used as evidence were distorted by SDSM, with crucial context missing from them. VMRO officials were accused of murder with this edited wiretap, and it was used to rile up one of the most violent protest of the Colored Revolution.

All these violations of the law and the judicial procedures clearly show that this trial is part of the systemic campaign of persecution aimed agaisnt VMRO-DPMNE officials. Zaev was given leevay by international representatives in his actions, justifying his powergrab by the need to bring Macedonia into NATO and the EU. With the collapse of the EU prospects and the entrenched Bulgarian veto, that was caused by Zaev’s policy of appeasement, and Zaev himself on the way out of politics, all that is left from his reign is the naked persecution of political opponents.