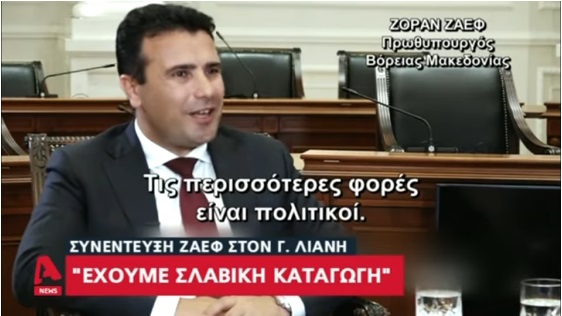 In an interview with the Greek Alfa TV, Zoran Zaev blamed his predecessor Nikola Gruevski of “appropriating world, Balkan and foreign” history as ours. Zaev told the Greek journalists that he will be remembered as the man who renamed his own country and asked that newly appointed Greek Prime Minister Kyriakos Mitsotakis keeps the Prespa treaty.

In the past, we had attempts to alter and deviate our entire history by appropriating elements of the world, Balkan and foreign histories as ours, without regard how that would influence our neighbors and led to a situation that we are literally feuding with nearly all our neighbors and that the EU and NATO integration process is closed, Zaev said, in a comment that will likely prove to be a God send to the neighboring countries, who insist that Macedonia is an artificial nation that doesn’t have a history of its own.

Zaev was criticizing Nikola Gruevski, who insisted that Macedonia is an authentic European nation with its own history. Zaev signed treaties with Greece and Bulgaria which allow these two countries to rewrite Macedonian history books, opening Macedonia to constant pressure to give up various historic figures and events. Under the treaty Zaev signed, the history of ancient Macedonia is carted off to Greece, the Macedonian nation is declared as Slavic speaking and under the treaty with Bulgaria, the origin of the separate Macedonian nation are placed deep into the 20th century.

I’m the man here in North Macedonia who will be remembered as the one under whose leadership the name of our country was changed. But as in a family, sometimes in life you have to make some steps, not so fortunate, not so fulfilling, but for the good of the children, the future of the family and of the neighbors you together make such steps. Now we have a new friend and strategic partner – Greece. Is it a small gain that we gained? It’s a big deal for me, Zaev told the Greek TV station.

Zaev asked Prime Minister Mistotakis to show that he is a man who wants what is good for his country and the Balkans, and asked him not to give up on the treaty.

When asked whether Macedonia will recognize the results of the referendums in four Ukrainian regions on joining Russia, Foreign Minister Bujar Osmani said that Macedonia will never do that. He added that it is important for Ukraine to win the war with Russia, which through manipulative referendums wants...
Economy 26.09.22 | 12:41