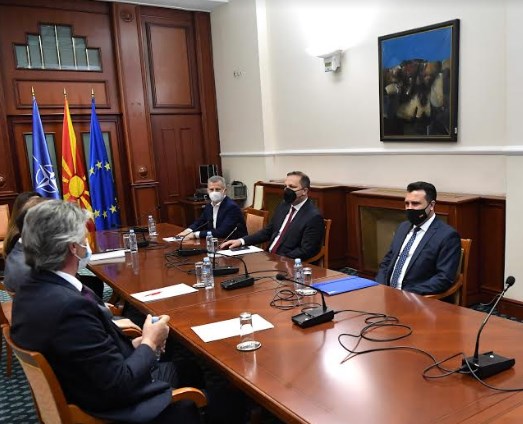 Prime Minister Zoran Zaev said that the proposal he received from the Alternative and Alliance of Albanians parties on the new citizenship law is not what he had agreed with their leaders. Zaev met with Afrim Gashi and Ziadin Sela and announced that they have reached agreement about their demand to issue citizenships to what they claim are thousands and possibly tens of thousands of ethnic Albanians who live in Macedonia but whose applications have been denied. The proposal was supposed to be submitted on Tuesday, but days passed with nothing come out in the public until Zaev was asked about it today.

This is not what we agreed, Zaev said, announcing new meetings, at a lower level, to repair the damage.

The two Albanian parties are blocking two dozen bills in Parliament and insist that their request must be met before they will lift their filibusters.

Zaev failed to deliver on several issues important to the ethnic Albanian parties – their request to introduce ethnic designations in the identity cards and to hold a census during the peak of the epidemic with mass registration of the Albanian diaspora. This is a third item in a row from the Albanian national agenda that Zaev is failing to deliver on.

The two opposition parties wanted an option to issue citizenship to claimants who will produce several witnesses to confirm that they have lived in Macedonia for a certain period of time. Zaev said that he can’t accept this option, but offered citizenship to all born on Macedonian territory – which could include thousands of Kosovo Albanians who have no other link to the country except for being born in a hospital in Macedonia.