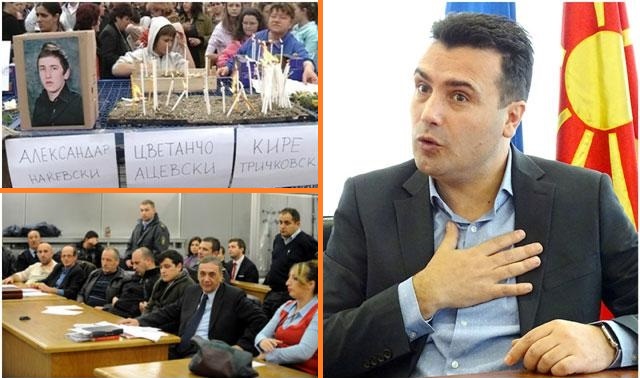 At Monday’s hearing in the “Monster” case, Zoran Zaev in the role of a witness said that he had met several times with relatives of the murdered boys, who wanted to get more information from the “bombs” that he and SDSM had in possession. At one of the meetings, some parents expressed doubts that the justice system was hiding information and evidence from them. He presented them with the audio material they requested, without giving them a copy.

At one of the meetings, the parents expressed doubts that the institutions of the system were hiding information from them. There were about 5 communications of convicted persons at that time, where one of the interlocutors was concealed by the court or prosecution because of official secrecy. I took out the same communications and presented them to the parents to see in my presence, without giving them a copy. I did not know whether it was illegal conversations or communication from special investigative measures. For the latter, I was advised that there is a possibility of criminal prosecution if special investigative measures, which are an official secret, are publicly disclosed, Zaev said.

Prosecutor Fatime Fetai asked Zaev whether apart from promising to hand over all material to SPO, he promised the parents something else as well.

Zaev said that in 2015 when he listened to the conversations on a daily basis, he might have promised to publish all wiretapped conversations about “Monster”. As an economist, not a lawyer, he alone could not piece everything together as to what actually happened at Smilkovsko Lake, so he decided to hand over everything he had as material in the bombs to the SPO.

Zaev said earlier that all the materials that SDSM had and which he had insight into as a party president were handed over to the SPO. He said that the inspection of the materials shows that there is no complete continuity, ie the people who were employed by the Ministry of Interior could not always obtain copies of those materials and submit them to the then opposition SDSM.

Zaev testifies in “Monster” case: I did not get the full picture of the case from the bombs, so all the materials were handed over to SPO

As to why not publishing the materials publicly, Zaev said that the only reason was that he did not think there was any completeness to create a complete picture, and therefore decided no to publish everything he had in possession but to hand it over to the SPO, so that they can use them to prove the truth about the “Monster” in the court.

Earlier, a video of Prime Minister Zoran Zaev answering MP’s questions in relation to the “Monster” case was played in the courtroom.

Did Zaev manipulate with “Monster” case and human destinies for votes?