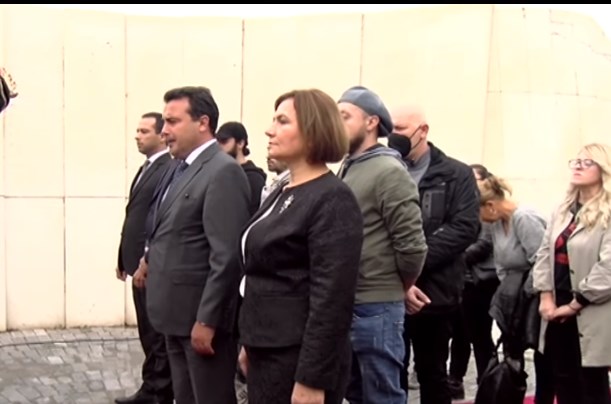 A protest took place in Prilep, during the celebration of October 11th – the 80th anniversary of the start of the uprising against the Bulgarian forces in World War Two.

Zoran Zaev and Stevo Pendarovski visited the partisan monument in Prilep to lay flowers there, but a group of protesters from the Levica party blocked entrance to the monument. Zaev and his retinue zig-zagged around the protesters, and quietly exchanged insults while after the wreath laying.

You should be embarrassed. You don’t belong here, you s..t on those buried here. Go celebrate this holiday in Bulgaria, Levica activist Ivan Jovanoski told Zaev.

After the event, Jovanoski said that he could not contain himself when he saw Zaev at the site, given all the national concessions that Zaev did and his on-going attempts to rename and redefine the Macedonian nation.

We all feel the same way. The people are not stupid, they understand all, Jovanoski said.

Prilep was one of the two cities where the uprising began, 80 years to this day. A key demand from Bulgaria, which Zaev is very open to, is that Macedonia rewrites its national history and waters down the reading of the World War Two guerrilla war that was waged here.