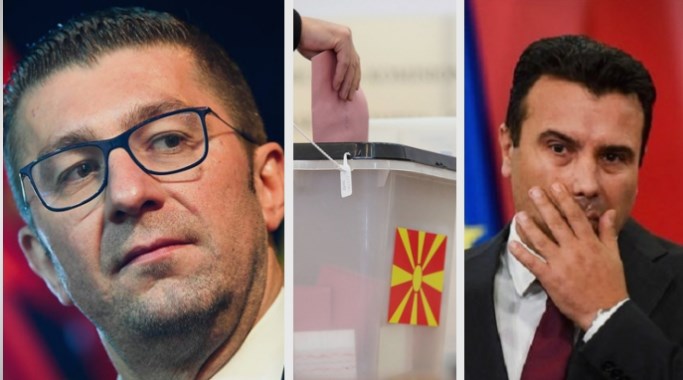 Following the debate on the handling of the coronavirus epidemic, the televised duel between Hristijan Mickoski and Zoran Zaev moved on to the issue of the huge Racket scandal. The duel comes hours after a short video was revealed, showing Zaev’s deputy in the party Radmila Sekerinska in a cozy meeting with Katica Janeva and Bojan Jovanovski – Boki 13, the two main perpetrators of the scandal.

You might be surprised in the coming days when you hear who else was close to the businessman Orce Kamcev, Mickoski told Zaev, announcing new leaks in the scandal.

Zaev tried to defend himself from his close association with Janeva and Boki 13 by claiming that he reported them to the prosecutors, after a meeting with Kamcev when the businessman reported to Zaev that he is being extorted. “You keep saying that, but there is no written report that you informed the prosecutors”, Mickoski replied.

Where in the law does it say that they have to make a report!?, Zaev shouted back.

Mickoski pointed to the testimony made by Boki 13, as he was being sentenced, that the money taken during the scandal ended up in the pocked of Zoran Zaev and his brother Vice. Zaev responded by claiming that the public should trust the testimony of the third defendant in the scandal – Zoran Mileski – Zoki Kiceec. Kiceec received a sweetheart deal with the prosecutors and in response began alleging that he was in contact with opposition officials, trying to shift public attention from the direct leads involving Zaev. Kiceec was also featured in another leak, showing that he was in contact with Montenegrin businessman Miodrag Davidovic – Daka, who is allegedly proponent of Russian interests in the region, and who paid Kiceec 300.000 EUR to secure a meeting with Zoran Zaev and lobby him for an energy project in Macedonia. Zaev also tried to respond to Mickoski by reheating old allegations against former Prime Minister and VMRO leader Nikola Gruevski, prompting Mickoski to ask if Gruevski lives rent free in his head.

Mickoski said that the best way to clarify the issue is that Zaev accepts his proposal for vetting of politicians, a process that would examine the personal wealth of top politicians and would determine if they can show how they earned the money. A recent leak showed Zaev bragging that he has 8.5 million EUR in assets, far far above what he has reported, and meanwhile his close family members such as Vice Zaev and his cousin Trajce Zaev are seen across the country driving hugely expensive cars.

We can’t have familly members of politicians driving Maybachs and Bentleys while the people can’t make ends meet. You say you will vet the judges, and in three years you didn’t get around to it. But it is clear where the process should begin – with the politicians, Mickoski said, adding that after the politicians, the judiciary will be next. He offered that the vetting process begins with him, but then moves on to the Zaev family, under whose term Macedonia was marked one of the most corrupt countries in Europe.

Mickoski also promised to implement one of the broken promises Zaev made during the Colored Revolution – to place an electronic counter on the Macedonia Gate that would show updates how much money was confiscated from politically linked oligarchs. Given Zaev’s close relationship with many of the businessmen he was criticizing during the Colored Revolution, the counter, that was put in place but never plugged in, became a running joke in the country.