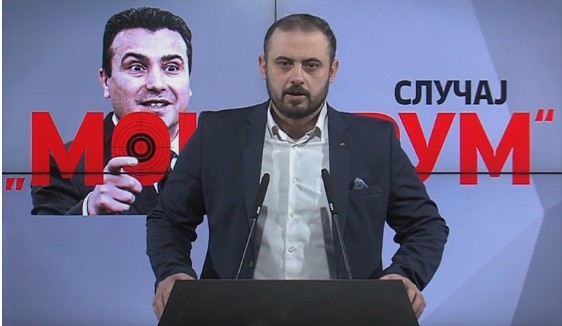 VMRO-DPMNE held a press conference today to outline some of the distorting, manipulative statements Zoran Zaev gave with regard to the 2012 Good Friday massacre. Zaev spread conspiracy theories about the killing of four Macedonian boys and one man by a group of Albanian Islamists, promising that he will “reveal the actual truth” and insisting that the arrested Islamists are detained for no reason. He eventually contributed to the release of those defendants who were arrested and to a retrial, during which it turned out that Zaev has no new evidence in the worst case of sectarian violence in recent Macedonian history.

Zaev shamelessly lied to the public that he knows the truth abut the killings at Smilkovsko lake. He lied to the families of the murdered children and took selfies with their killers who he released from prison. The monstrosity of this man is now on full display. He abused the murder of four children and a man for his own political gains. He lied to the public that he allegedly has evidence about a “painful new version” of the massacre, but now, five years later, we see that he has nothing. Shameless! Monstrous!! Zaev abused the death of others to grab power, said Orce Georgievski from VMRO-DPMNE.

The spreading of the conspiracy theory turned into a policy plank for most Albanian parties in Macedonia, who demanded a new investigation into the case and a release of the defendants, while blaming VMRO-DPMNE of allegedly staging the massacre. A version of the conspiracy theory, spread by media outlets close to SDSM, was that then Parliament Speaker Trajko Veljanoski ordered the killng. This became an important part of Zaev’s 2015 Colored Revolution campaign. Zaev was eventually asked about this in court last week and acknowledged he has no evidence against Veljanoski and blamed the media outlets for coming up with the story. The editor of one of these media outlets publicly said that it was Zaev himself who started the rumor. Meanwhile, media crews filmed the Islamists, who have been released from prison since 2017, laughing while Zaev was giving his statement. The killings were perpetrated on the eve of Good Friday, with the apparent goal to spark a religious war, and only one of the killers was arrested, while the other two have disappeared in Kosovo.

On May 27 2015 Zaev said that he will reveal a painful new truth about this Monster case. In 2017, speaking to a Serbian news site, he went a step further, claiming that the then Government was involved in the massacre, and that the arrested perpetrators are innocent. This was followed by media campaigns to tarnish politicians and to toy with the feelings of the families of killed. For five years Zaev manipulated the families with alleged new wiretaps that would reveal new facts. This man is a shameless liar and a fraud, the least he can do is apologize to the public and leave politics. Our institutions need to investigate his responsibility and treat him accordingly, Georgievski said.

It was just one of the many emotional cases which Zaev manipulated during the Colored Revolution, all of which were revealed to be overblown or completely fabricated. These included conspiracy theories about the 2015 attack on Kumanovo, the traffic accident that killed journalist Nikola Mladenov, the death of Tamara Dimovska and the murder of Martin Neskovski.